Sketching for the GBBC 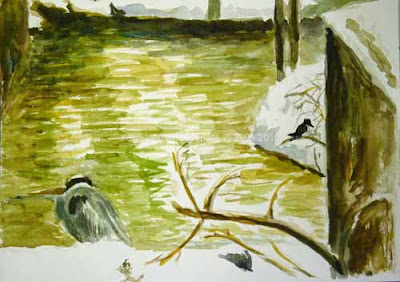 I always look forward to Cornell Laboratory of Ornithology's annual Great Backyard Bird Count. It always occurs in February and forces us into some winter birding. I like to go all 4 days of the Friday-Monday time period but the 48 inches of snow have complicated things. It's difficult enough to just get to work and buy groceries. So I didn't get out on Friday.

Today we did our errands early though so we went out for two hours. Normally we go the Wissahickon. But to have done so today we'd have given up our parking place, which would surely be gone when we returned and forced another lengthy hunt, and we might have had trouble parking at the Wisshickon.

So we decided to walk instead. We're fortunate to be in the middle of one of the 10 largest cities in the U.S. and still have two bodies of water less than a mile away. To the northeast is the Wissahickon Creek. To the southwest the Schuylkill River, and a small towpath that parallels it. The walk to the Schuylkill is a steep climb down and back. But that's what we took today, slippery, icy slopes and all.

It reminds me of why I like the GBBC so much. You get out in an unusual time of year and see your own neighborhood in a new light. We were shocked to see 19 species, including a Sharp-shinned Hawk, Swamp Sparrows, a Fox Sparrow, a Red-tailed Hawk, and the subjects of this painting, a Great Blue Heron and a Belted Kingfisher.

We've seen both before on the GBBC but I thought there was no way we'd see a Belted Kingfisher. I figured the huge amount of snow we've had this year would force them further south. But no, right there on the Manayunk Canal towpath, just as we were ending our trip and heading back uphill we saw the heron, then the kingfisher. In the same place we saw our first Downy Woodpecker, Canada Geese and Mallards.

It was too cold to sketch so I just took some quick photos. The accompanying watercolor is a composite. The heron and kingfisher were never so close together. But I wanted to get them both in the same picture.

This compositional freedom is something that I did all the time in my abstract work. But this is the first time I've done it on such a large scale in a representational work. Most representational artists will probably be shocked at this. It's a basic tool of the trade. But I've never felt comfortable enough with birds, or landscape for that matter, to stray far from what I actually saw, particularly if I'm using a photo.

But that is very limiting. I celebrated the GBBC today by taking that step.
Posted by Ken Januski at 6:30 PM

I like the combo of the two birds. The stillness of the birds and the bare branches contrasts nicely with the movement of the water. Even in cold, snowy winters, water flows. Please, please send some snow this way. The blizzard pizza looks excellent too! And I would concur with others that food is art. Looks like a watercolor to me. I appreciate the detailed descriptions that you provide with each drawing(s).

Speaking of flowing water we saw these birds at a canal that is probably 300 yards away from a large river, the Schuylkill. We had been following it for a quarter mile or so and the top was completely frozen. Then we came to a section crossed by a very small bridge. On the other side as the canal continued it dropped about 20 feet and the water was no longer frozen. There the heron, kingfisher, mallards and Canada geese all congregated. I'm not sure if it was just the dropoff or something more that prevented the top from freezing and provided a sheltered spot for all these birds.

Either way we learned a new spot to look for birds in winter.

I'm glad you enjoy the writing that I attach to the drawings. I always think that there are probably some people who enjoy this, at least I hope so. I know some people think art just springs out of the blue with no thought at all but that's often not the case. So I thought that at least some people might be interested in what goes on as I do these drawings and paintings.