Seeing What You Have 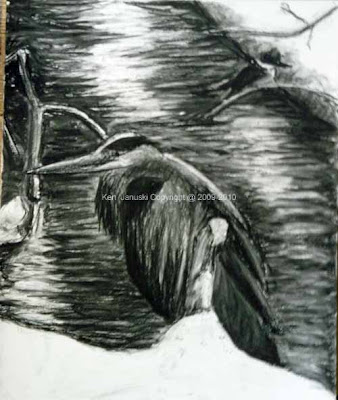 It seems like a long time since I've written about improvisation in art, a popular theme of mine for awhile. In the past I've mentioned it in relation to my abstract art which had always been improvisatory. It was something I missed in my representational work.

Today I was reminded of exactly what I mean by improvisatory. I realized that I didn't know what to do with this charcoal drawing of the Great Blue Heron and Belted Kingfisher that I saw yesterday. I would only know what to do once I put some marks down. In other words the drawing develops in reaction to what is already there. But I can't start reacting until I put something down. So in a sense what I put down to begin with isn't that important.

Make sense? I hope so. I think I've always known this but it hit me over the head today when I realized that I really wouldn't know what I wanted to do until I did something!

This style of charcoal drawing lends itself to that much more than watercolor does. It's difficult to react to what you've put down in watercolor and not end up with mud. Work that looks bright and fresh in watercolor seems to require planning. Improvisation is just hard in watercolor. There's an element of difficulty in charcoal in the sense that once you really rub in the charcoal it's hard to get the white of the paper back. But other than that it's a pretty improvisatory medium.

In any case I've been wanting to do some more improvisatory work for awhile. This is the first. I'm not sure if it's done. Sometimes you just need to let something sit and see if it still looks right 24 hours later. For now it's done.

It does continue with yesterday's goal of combining the heron and kingfisher that I saw yesterday into one drawing. They were very close to one another. But not so close as to end up together in one drawing or painting unless they were just small blobs. They were never as close as in this drawing. That juxtaposition is an artistic liberty. Improvisation and liberty in one drawing. Sounds like a good game plan!
Posted by Ken Januski at 5:03 PM

Glad you're enjoying them. I really enjoyed the new Yellow-rumped warbler on your site!