Coopers in Snow with Prey 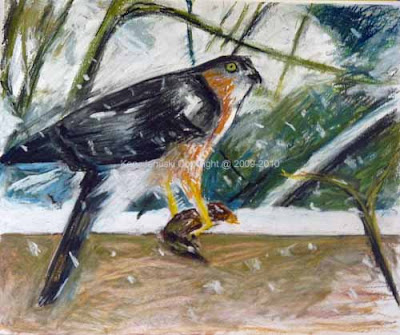 I think I neglected to mention yseterday that when the Cooper's Hawk took his prey it was snowing very hard. And it was windy, almost blizzard-like. I thought I'd like to get that into the drawing or painting but realized that would have to be the last touch. Given all the trouble I had getting the hawk right I couldn't be thinking about embellishments like snow. Like the parsley garnish without the main entree.

In any case this morning I continued work on the pastel and I'm satisified with the hawk. Once I got to that point I decided to do something to try to indicate the blizzard-like conditions. I'm normally unconvinced by attempts to indicate snow or rain but I couldn't resist giving it a try!

I'm happy with it. It reminds me of a quote I ran across by the artist Raymond Ching in the book 'Wildlife Painting' by Susan Rayfield: '"What I want to do is paint a picture that will make you feel the way I felt.". This does that and I can't expect too much more than that. I should add that tomorrow is the second anniversary of this blog. I'm not sure whether I'll post or not but if not I think this drawing and quote are an apt second-anniversary post. The drawing portrays what I felt and this post talks about that as the main goal of art. Apt enough!
Posted by Ken Januski at 9:48 AM

We often find Coppers & red tail hawks near our backyard feeders. When the birds disappear you know a hawk is near.

Thanks Pam and MS,

Pam, I think I captured the dramatic excitement of the moment so I'm happy with that.

MS, we see the same thing. If there are no birds at the feeder we go upstairs where we have a better view of the tall trees nearby. Often we'll find a Coopers or Sharp-shinned Hawk up there. Once you get to know it nature begins to have some rhyme and reason. Of course for us the rhyme and reason are just interesting knowledge. For the birds it's a matter of life and death.