My Trials and Tribulations 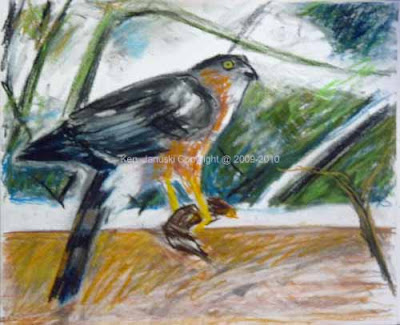 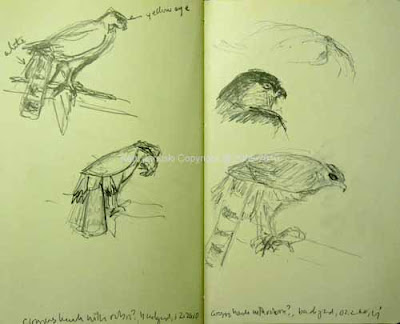 were nothing compared to the bird that this Cooper's Hawk caught and ate in our backyard today during the middle of Snowstorm # 4. I fear it was a Robin. It was larger than the House Sparrows and I saw a yellow bill. But maybe luck was with the Robin and instead it is one of our many Starlings.


I've never been someone who's biased in favor of hawks when it comes to the bird-eat-bird world. Yes it is part of nature and it is perfectly natural. Hawks do have to eat and we're always happy to see them. But we do have favorite birds and both I and my wife would prefer that the hawks not eat them. I admit this is strictly a human bias, but it is mine nonetheless.

I suppose the bias is even stronger when you see a hawk methodically tear apart his prey. If you live in the city and don't count human activity you really don't see all that much of 'nature bloody in tooth and claw.' Of course it goes on all around us, certainly with insects and with birds eating insects. But a warbler taking a small caterpillar takes all of two or three seconds. A hawk taking a robin or pigeon easily takes fifteen minutes. So 'nature bloody in tooth and claw' is on display for a good long time.

The one good aspect of this is that there's plenty of time to sketch and shoot photos. I did both this morning. And that's where MY trial and tribulation comes in. 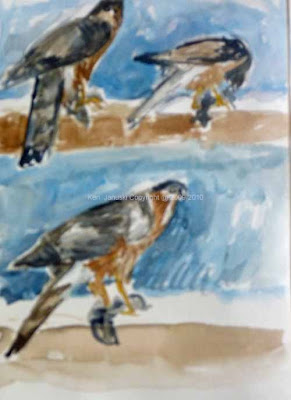 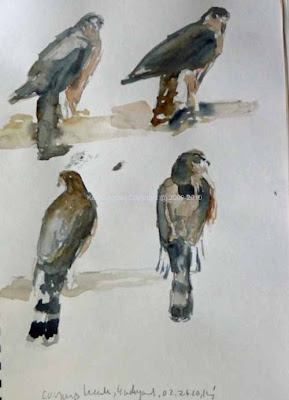 But I hated everything I did. It didn't capture the way that the hawk curved his body over its prey, very intent on his meal. The watercolors looked horrible - not exact, with runny, muddy colors. And sometimes the proportions were just totally off, as in the quick watercolor below. 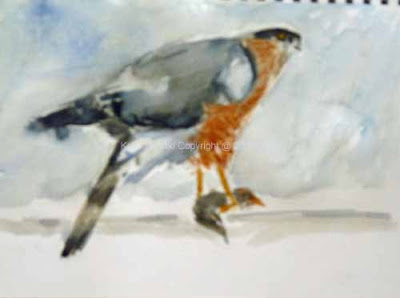 I also realized that the photos just weren't detailed enough. I really couldn't get a good look at the bill,among other things. So I flipped through the pages of a book I have on birds of prey and drew the bill and feet from a photo in that. Then I did a few more sketches from my own photos. 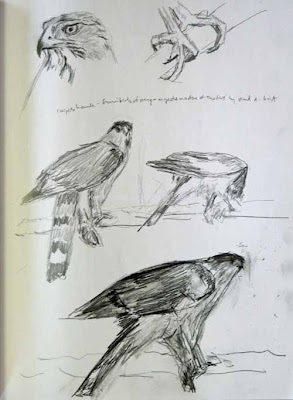 But I wasn't pleased with my drawings either. In particular the pose of the hawk hunkered over its prey always looked wrong. Finally I started on a larger charcoal and pastel. The most current version is at the top. I use charcoal in such a way that it often exudes a lot of energy. That seemed fitting for the scene. It can also capture both frustration (mine) and action (the hawks). The way I use it, charcoal also lends itself to going over the contours of the shapes over and over until they seem right. I knew I'd need to do that.

So that explains the pastel and charcoal. It still needs work and I'm STILL not happy with the proportions. But I've been at this hawk for eight hours now. It's time to give it a break. I was really happy to have the opportunity to do some work from life. But who would have thought such a hopeful beginning could lead to such a disastrous middle and end? But at least I wasn't his prey. That would have been a real disaster. Sometimes it's good to keep a little perspective..........
Posted by Ken Januski at 6:04 PM