George Bush and the Osprey 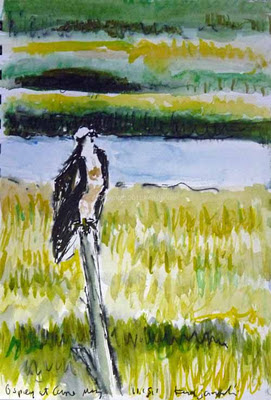 I know that the title of this post probably hints at a nasty joke at the expense of George Bush. I'm no fan of his but that's not the reason I titled it so.

I try to stay away from politics here, not that I don't have very strong feelings and thoughts about it. But I don't believe readers read this for politics and so I don't want to do anything to scare them off, well at least most of the time. Occasionally I can't help myself.

The reason I mention George Bush though really does relate to ospreys. I was trying to walk off the depression of his re-election on the day after the election in November, 2004. I was near Kitchen's Lane Bridge over the Wissahickon in Philadelphia. A huge shadow appeared in front of me and I looked up to see an osprey heading up the Wissahickon with a fish in his talons. I believe it was the first osprey I had ever seen there. It certainly was the latest. 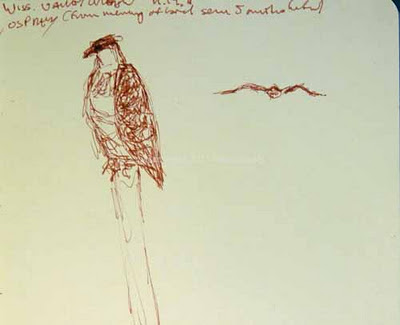 I had mentioned this to an accomplished Philadelphia birder about a month ago and he expressed some surprise. It seemed late for ospreys here. That was my thought when I saw it and when I saw subsequent ones along the Wissahickon in October of numerous years since then. Still there was no doubt what I was seeing.

Yesterday Jerene and I went out to see if the immature Red-headed Woodpecker was still there. YES! Five weeks since I'd first found him. Since they bred here in the 19th century I do have to wonder if he might not stay. When I've seen him he's acted as though it's always been his home. As nonchalant as could be.

When we first arrived at Wissahickon near Valley Green we heard some whistles I couldn't quite place. They seemed wrong for the squeaky whistles of Wood Ducks. But we couldn't find the bird. When we returned from our walk down to the woodpecker though a huge shadow went over our heads. A beautiful Osprey. He sat in a snag directly across from the Valley Green Inn for at least five minutes. Then he flew around the nearby bridge for another five minutes before heading down stream.

I didn't decide to sketch him until just before he left. So the field sketch at top is really more from a visual memory of the bird I'd just seen than from actually looking at it and drawing it. The same is true of the bird as he flew downstream. This is definitely the latest I've ever seen an osprey at the Wissahickon.

This type of sketch from memory is often wrong. I've not made his wings as long as they should be. But each time I do this I learn more. Eventually I'll have a pretty good sense of an osprey's shape before I try to draw the one that just landed in front of me, along the Wissahickon at a time he shouldn't be here.

The watercolor at top is another done on Stillman & Birn Beta sketchbook. It has worked just fine for the washes and watercolor that I use. The ink is the same runny ink from a Bic pen that I've mentioned in the past. One of these days I'll have to explore a ballpoint pen whose ink does not run. For now I'm just using it to ease the way from a drawing to a painting. The painting is based on a photo and field sketch of osprey with punky looking head feathers seen in Cape May last August.
Posted by Ken Januski at 4:17 PM