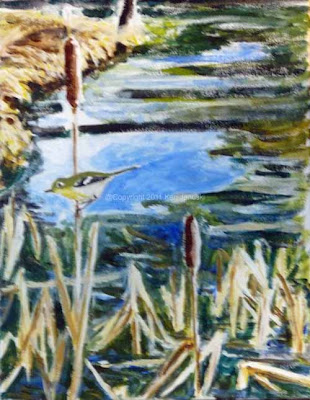 One thing I forgot to mention, and it's kept nagging at me, is the emphasis on field work in much of the art of the Society of Wildlife Artists. I'm so used to it now that I forget that I take it for granted. But I just wanted to add that I think that's an essential ingredient to the liveliness of the art, at least wildlife and nature art. 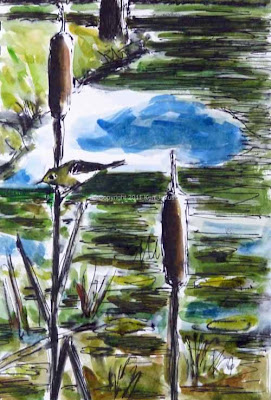 The ink and watercolor sketch above reminded me of this principle. Ever since I saw and sketched the Ruby-crowned Kinglet on some cattails at Morris Arboretum in sketch below last week I've toyed with the idea of making a more finished work from it. 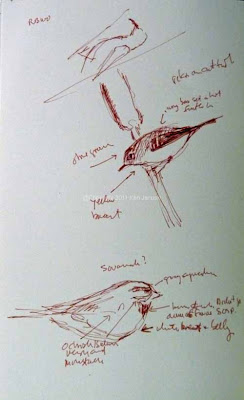 As I've mentioned for probably four years now Kinglets are very hard to draw in the field. They just don't sit still, at all!!! Almost as though they get paid by the flit. So the sketch above is really more from memory than from looking at the bird. I had just seen the bird but it was gone before I could put it down. So this is drawn from a mental image. That in turn is partially formed by all I've learned over the years in sketching Ruby-crowned Kinglets. I have to keep reminding myself that the wingbars start further back than I expect them to, etc., etc. The pose on the cattail was also from memory. Most cattails stand straight so already there's somehing a bit off in the sketch. But it did serve as the impulse to keep thinking about a more finished work with this subject. 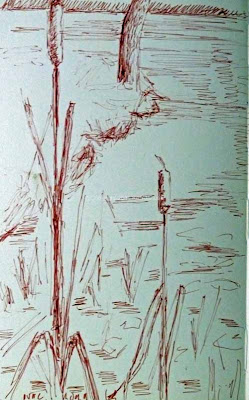 Yesterday we spent much of the day at Peace Valley Park in nearby Montgomery County. We only get there about once a year. Yesterday's promise of sunny weather in the high 60s AND a selasphorous hummingbird seen the day before were enough to convince us to give it a visit. The hummingbird had not been seen since the day before and we didn't see it either. There were six Ruddy Ducks and lots of gulls but other than that the only surprise was a late season Gray Catbird.

But there were cattails! There is a lovely pond in front of the bird blind there. We sat for awhile and sketched cattails. Ever since I'd done the sketch of the kinglet and cattail I've regretted that I didn't take some cattail photos for reference. So when we found some right in front of us it seemed the perfect time to make sketches and take a couple of photos.

This morning I tried to put all that together in the ink and watercolor above. This one is done on paper from the Stillman & Birn Beta series of sketchbooks. It's similar to the Delta series in that it's a very heavyweight paper. The difference is that this is natural white rather than ivory. Both have proved very useful for this type of quick sketch that includes a fair amount of water.

As usual I'm finding this method of ink that runs when water touches it and a bit of watercolor on this paper to be a good way to work through ideas for more developed work. I'm still not sure that I can pull off a painting based on this theme. But I'm definitely toying with the idea.

A few hours after posting this I had decided to just make an acrylic from this idea. At top is the result of the first few hours work. I'm sure there's still much more to do. I'm happy to say it's based largely on sketching from life and only minimally on photos I took.
Posted by Ken Januski at 10:02 AM

Love all of these pieces, Ken. Great contrasts working. You've had a great year... Bravo!!

Thanks Pam. It didn't really seem that way as it happened but after the fact I realize that it has been a pretty good year. And you've had one yourself as well I think!

A nice combination of kinglet and cattails. I've been seeing small flocks of golden-crowned kinglets as they move through on their way south. Kinglets do move fast, but such sweet birds.

Thanks Ellen. I started thinking about Golden-crowned Kinglets after your comment. We've seen some but not that many yet. Then we went out for a bit yesterday and saw a couple more. They're always a pleasure to see, even if they make be feel like a rank beginner when it comes to sketching them!