Ten Terns and SWLA(The Other Acronym) 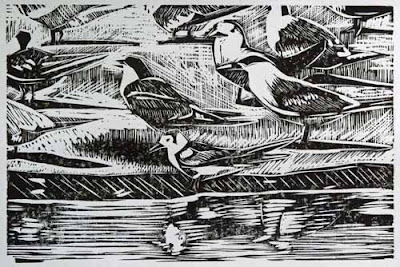 In any field there are acronyms that often mean a lot to the few people that are interested in that particular subject but often are meaningless or actually sound like pretentious nonsense to others. I used to work in IT and as you can guess there were so many in that field that you could almost construct entire sentences of just acronyms - not that anyone in their right mind would want to.

As I've mentioned on and off over the years of this blog's existence I've struggled to combine my so-called 'fine art' background with wildlife art. I put 'fine art' in quotes because to me there's a false but nonetheless existent dichotomy in the art world between the two. If you doubt this actually occurs in practice ask yourself how many paintings with wildlife as subject you've seen in museums. It is almost unheard of to find contemporary wildlife art shown in museums.

I think this is both silly and harmful. But it's also a complex situation. There's much wildlife art I don't like. It's cute, or formulaic, or slavishly photographic. So I've always felt myself much on the far outskirts of wildlife art. And yet there's no reason at all that it shouldn't be the subject of contemporary, high-quality art. When I started using birds as subject five or six years ago I could find extremely little contemporary art with wildlife as subjects that I liked.

But slowly I found a few people. And then I found a lot. A huge number of them could be found at one place: SWLA. So for me this is an acronym that packs quite a punch. It exemplifies, particularly in the work of many of its members, what wildlife can accomplish and what it should aspire to.

SWLA stands for Society of Wildlife Artists. For years I've looked through the work of its members and admired it. When I can afford to I've bought books of their work. For others I'm waiting, eagerly, for their first books to be published.

It is based in London but accepts international members. There is also an annual competitive show, called as of last year I believe, 'The Natural Eye.' The 48th annual exhibition is on exhibit now in London.

I applied for it a number of months ago. I thought it would be difficult to get into, not to mention difficult to figure out how to ship. Because of the costs of shipping though they allow international artists to apply first with digital images. If they are pre-selected then they need to ship their framed works for the show and go through a final judging.

My work was pre-selected! So I created new mats and frames and figured out how to ship it there, without truly extravagant costs. But I didn't anticipate customs, something I've never really dealt with. To make a long story short the prints were still in customs on the day of final judging. I gave up on being in the show.

Then a few weeks ago I heard from Mall Galleries that the prints had arrived and would be in the show. I couldn't believe it! My prints hanging with some of the artists I most admire. I put a small notice at the top of my blog under 'About Me' that referred to it. But I didn't want to write about it on the blog until I knew for sure that the prints were hanging. A week ago I wrote that I was in two shows in one week, both with acronyms. This is the other one.

So I looked for reviews after the opening last week. The best I've read so far has a number of photos. But it and other reviews all showed the work with light colored mats and light colored frames. Mine had neither. Was there a framing rule I'd missed that required them? Since even pre-selected work could be refused for improper framing I began to doubt that my work was finally in it.

Today it was confirmed that it is and has been hanging at show for last week or so! I think I need to pinch myself in order to truly believe this. I only wish I could see the show myself. The review mentioned above states how high the quality is and also mentions that the printmaking is 'stunning.' I couldn't ask for much more than that, other than to actually see it.

There is one more thing that would even be better: to have gone to the opening and to have met my online friends from the Wildlife Art thread of birdforum that are also in the show. The ones I know of are: Tim Wootton, winner of Birdwatch Artist of the Year award, Nick Derry and Adam Bowley. I don't think any of them were at opening and may not even get to show. But as I said that is the one thing that I could wish for to make being in the show even more exciting. And I've never seen their work, or the work of SWLA members, in person. I'd love to be able to do that, especially with mine hanging somewhere nearby.

****
I had to choose an illustration for this post. I could have chosen two prints that are in show but I've shown them before. One in fact is now the header image for this blog. That's the Blackburnian Warbler. The other print is the black and white linocut of the Louisiana Waterthrush and Ebony Jewelwing.

But since I've nearly finished the newest lino I decided to show it instead. It's at a point now where every little change makes a difference. I think it's done, outside of printing an edition on good paper. But I need to let it sit for a day of two to make sure it's done before printing an edition.
Posted by Ken Januski at 1:57 PM

Ken, I know of the SWLA and I am SO happy for you! And to go through that rollercoaster of not knowing what the status was. No wonder you aren't sure if you are dreaming or not. But that is just so fantastic. A huge congratulations!

Thanks so much Gabrielle. As I told an old acquaintance of mine there is no show I'd rather be in. I always apply for Birds of Art in the US but my heart is with SWLA.

The gallery was kind enough to send me a few photos of my work. Unfortunately they're not for public use so I can't post them. But at least I can get some idea of what the show and my worked looked like.

After the lengthy ups and downs I can't tell you how satisfying it is to see my work in the show. I never thought it would happen.

...what a story, Ken. Congratulations! I've admired the artists of SWLA for a long time, and you're a perfect fit. You must be walking on air.

Thanks Kelly. You know I'm just starting to walk on air now. And the show ended yesterday. But sometimes I'm a bit slow at really believing good news.

Like you I've admired SWLA artists for a very long time. Eventually I'll get a catalog. Even though I won't be in it I will be able to see the artists that I admire who were in it. I'm looking forward to that!