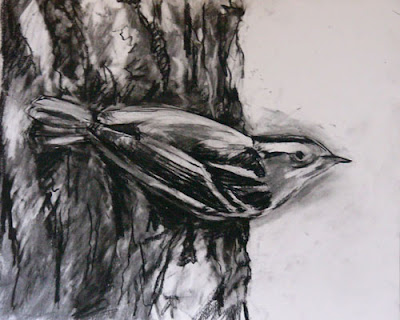 The memory in the title of this post refers not to how memory works in birds (who would know?) but how an artist needs to use his memory of a bird to draw him or her. The drawing above is not drawn from memory or from life but is informed to some extent by my memory of all the birds I've seen and drawn.

This is my newest charcoal drawing, based on a photo of a Black and White Warbler taken in the trees right outside the Cape May Bird Observatory office in late September, 2008. Cape May has a wealth of good birding spots but sometimes one of the best can be right around the office. Easy birding! Along with many warblers we saw that day here we also saw our first Brown Creeper of the fall.

I continued my live bird sketching this week and it's improving. But there is still a long way to go. One thing that live sketching forces you to do is make quick decisions. Birds, at least feeder birds, have often moved by the time you get pen or pencil to paper. So if you want to be successful, and I say this as someone who's not, I think you need to think as you draw. What should I put down first? The head? What shape is the head? The torso? What shape is it? Where precisely are those dark markings on the throat of a House Sparrow? How does the bill join the forehead? That's the gist of what I learned this week and my sketches have improved a little.

In sketching, if you want to get more than just a sense of movement as in some of the sketches in my last post, you need to recall what a bird looks like, how the bill meets the forehead of a House Sparrow, at the same instant that you are putting pen to paper to catch the bird that's about to move.

It's challenging, sometimes so challenging as to make you want to give up, but also exciting. Will you be able to be a bit more successful this time? This is part of the excitement I mean when I talk about the values of drawing from life.

All well and good you say but why show a drawing based on a photo? Well for one because it's my newest drawing. I'm still not sure if it's done. But also because I drew it after some life sketching yesterday. Though you may well understand the various large feather tracts of birds, e.g. greater coverts, primaries, etc., it's very hard to see them in the brief time in which you see a bird you're trying to sketch. Still that knowledge can help you as you make split second decisions as to what you put down on paper. You look at the bird, review your memory of bird feather structure, think about how you can apply that to this particular sketch, remember what you might have learned in previous sketches and put pen to paper in a second or two or five at most.

As I was working on this drawing I recalled some of what I'd just experienced in sketching House Sparrows, particularly regarding location of feather tracts. The photo is based on just the flat representation of what the camera saw. The photo is just marks on paper; it's not the complicated three-dimensional object itself. The great danger of photos is that they are two-dimensional just like drawings. So in a way the translation is easy. You are going from two dimensions to two dimensions. But a bird, or anything else, is three dimensional. The type of drawing I want to do goes from two dimensions(the photo) to three dimensions(what the photo represents) to two dimensions(the drawing). To do this successfully you really need to understand the structure and volume of the object you're representing. The best way to do that is through the knowledge and memories gained from trying to get down on paper a bird that won't sit still for more than a split second. 'Neural memory', if I recall correctly, is what the Motmot called it. It's part of what makes some drawings seem much more lifelike than others, and I think it's probably also part of what makes drawing from life so rewarding, even with all of its frustrations.

Email ThisBlogThis!Share to TwitterShare to FacebookShare to Pinterest
Labels: Black and white warbler, cape may, charcoal drawing, sketching from life

As a fellow bird artist, I surely understand the frustrations of trying to draw a bird that insists on flying away immediately or just decides to stay on the back side of that tree! I've been at it for over 20 years and it is still an often unsuccessful challenge.

I just got listed on the Nature Blog Network and I've been checking out blogs by other birders.

Thanks for your comments. If you've been at it for 20 years then I guess you've won more battles than you've lost in these challenges!

I just took a look at your blog (I'll poet a comment later) and have to agree about the appeal of transparent watercolor. It is really pretty new to me, mainly because I've spent most of my life as an abstract painter in oil and acrylic. So the switch to the much less forgiving medium of watercolor is difficult. At the same time it just seems to do a great job of actually creating the feeling of light, atmosphere, being outside. So I keep at it, maybe in fact later today when I finish my blogging chores....... LIke you there's that constant dilemma: paint or blog.