I Thought I Could Draw a Bird 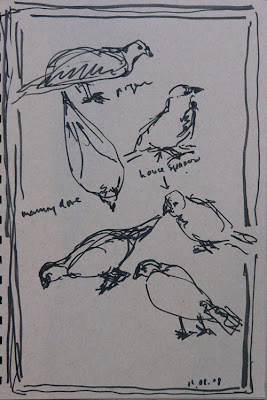 or maybe just a squirrel if the birds were too bad, but even that was tough today, the first day of Project Feeder Watch. 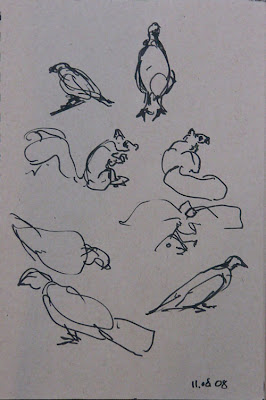 As I've written many times both here and on my main web site I really prefer working from life and not from photos. There is an immediacy that the artist tries to capture when he's drawing what is right in front of him that is lost when working from photos. I work only from my own photos so I have more of a connection than with someone else's photos but still there is something lacking.

However I know that the beginning of Project Feeder Watch will soon show me what a dangerous idea that may be. Live birds, particularly when they're feeding, can make me look like a rank amateur! But as the Motmot says you've got to own a bird, not like owning a pet bird, but in the sense of knowing some birds well enough to draw them blindfolded, or as she says "the essence of the bird is yours to keep."

Project Feeder Watch is one of many Citizen Science projects sponsored by the Cornell Lab of Ornithology. It strives to use ordinary citizens to collect important data about birds. The sheer numbers, especially when done in a controlled way, prove valuable to scientists in studying bird populations, bird behavior, etc. In Project Feeder Watch people count the birds that they see at their backyard feeders from early November until late March or early April. It's both fun to do and scientifically useful.

For me it is SUPPOSED to be the chance to force myself to work from life. Well as much as a brick wall offers me the chance to bang my head into it.... Just kidding. It is an opportunity and I'll take advantage of it, I hope more this year than last year. But as you can see it is a challenge. Those birds just won't sit still. Most birds I've drawn on these two sheets held their pose for less than 2 seconds. I hope the drawings will show an improvement by the end of Project Feeder Watch season. I'll be doing my best to make sure that they do.

Ken, it's gets easier, I promise. It's one of those darn practice-makes-perfect drills and takes you to an interesting step beyond birdwatching when you actually interact that way with your (fleeting) subject.

Thanks for the mention!

I'm sure that I'll improve over time if I just practice more but sometimes the results are so disappointing that I lapse from my practice. I've vowed that this year will be different! By the end of Project Feeder Watch season, I will be much more accomplished at drawing birds from life.

I've read in a number of places about birdwatchers sketching birds to help in their identification skills. And I really think it's true. Once you start looking at a bird with a view to draw it then you see things you'd never noticed before. Maybe this is the 'step beyond birdwatching' that you mention.

I was happy to mention your post because I really think it's a great one for both birders and bird artists.

I, too, heartily agree with drawing from life. I am a nature journaling advocate. The more you draw, the more you see.... The clearer your vision becomes.
And ownership! What a marvel! Try a sketch and wash pencil and watercolor pencils, not to mention a water brush. Freedom to capture it all with just a pencil case and a sketchbook :) Love your blog!

Thanks for your comments Pam.

I think that once people start working from nature they realize that it offers something special. My problem is that after many years of working inside on abstract work it's easy to continue to work inside on naturalistic work. So I'm making a concerted effort this year to force myself to do more sketching from nature. And since my birthday is fast approaching I've hinted to my wife that I might want to try one of those fancy water brushes that The Motmot has written about.
I need to spend some more time looking at your blog but I did write a comment on the very nice newspaper coverage that you received. It must be interesting to lead a nature journalling workshop. I used to teach drawing to adult education classes in Philadelphia and I think most of the students really loved it. Combining that love of art with a love of nature through nature journalling seems like a winning combination.

Ken, ask for medium and large waterbrushes :)
I missed that post from The Motmot. I love her paint box. She is such an inspiration!

Hey, I see conducting field sketching workshops in your future! Go for it! The more we wake people up the better our world will be taken care of :)

Well my birthday came and sure enough I got a waterbrush, size Small! But I started playing with it and enjoyed it quite a bit even at its small size . A few days later a package came in the mail for my wife and she indicated it was another present. But then she said nothing more about it. Sneaky one that she is though, I went to grab my sketchbook and small waterbrush later in the day to try them out on some feeder birds. There I found a new waterbrush, this one size Medium!

I'm not yet ready to show anything I've done from life with them but I do think I will be soon. They really are so convenient. Who would have thought I could get my entire watercolor setup on just a small corner of the table? Now there's no excuse at all to refrain from doing watercolors every day.