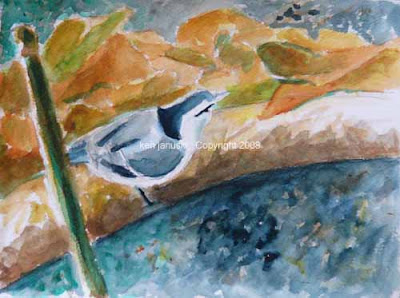 For many years we've always taken a break from our Thanksgiving meal preparation to take a walk on Forbidden Drive at the Wissahickon Creek in Philadelphia. Sometimes it's fairly eventful and we may see a Pileated Woodpecker or two. At other times it's much quieter. Still it reminds us of much that we have to be thankful for, especially being so near to this place of natural beauty and life. It has always seemed like the perfect entertainment for a holiday like Thanksgiving.

Thursday's walk found this White-breasted Nuthatch on a limb that crossed in front of some of the Wissahickon's metamorphic rocks. I wish I could name the rock. It looks like the greenstone we often see in Shenandoah National Park but I just wasn't paying that much attention to it when I took the photo that served as the basis for this. But it sure does look metamorphic. We also saw two other Nuthatches, one Carolina Chickadee and our first fall Brown Creeper in Philadelphia, at least 50 feet high in Sycamores and other trees. This seemed surprisingly high to us. That was one of the few places that the sun was shining though so it might be that insects were active there and the Creeper knew this. He was busy scouring under the bark.

My birthday occurred recently and among my presents were a couple of waterbrushes. I started playing with them yesterday and hope to do some more life drawings of feeder birds today and tomorrow. I also used them in this first waterbrush watercolor. It's not quite a lump of coal but leaves very much to be desired. But it was a useful experiment in using the waterbrushes and shows me that they have a lot of potential, especially for field sketches. If I have any success with feeder birds and waterbrushes this weekend I may post them later. The painting also reminds me of all the improvements I need to bring to my watercolors. That is sobering but still useful. Normally I probably wouldn't post this image. But it does serve as an illustration for our Thanksgiving walk and that is worthwhile in itself.
Posted by Ken Januski at 10:59 AM

I think your nuthatch is wonderful! I love the color shapes you've created within the little guy. Don't sweat the leaves. Viewers will know what they are and besides, they make your subject stand out. Happy experimenting :)

Thanks very much! I'm glad that someone likes it. I think that all I see are the things that I didn't do in the watercolor that I wanted to do so I am somewhat disappointed in it. And you're right the amorphous leaves are part of what I am unhappy with about.

But you only learn from doing so I am going to keep at this. I do feel very confident as an artist but both watercolor and drawing from life are humbling. Oh well I guess a little humility never hurt anyone.

I don't know if you saw my post where I noted that I did get both medium and small waterbrushes. Today I picked up some watercolor pencils so I expect to have a great adventure in front of me! I'm sure things will soon change for the better(at least in my mind) and I look forward to experimenting.