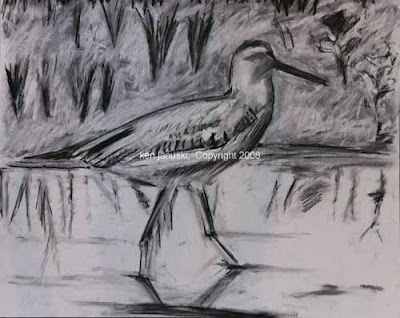 I think that this drawing of a Lesser Yellowlegs is done. It's based on a number of photos taken at Cape May, NJ in early October. A very handsome Pectoral Sandpiper fed near this Yellowlegs and he might appear in later drawings. Earlier versions of this drawing appear in the last post. That post ends by saying that I hope I can add some background to the drawing without also removing all the life from it. This may make no sense to non-artists but artists I think know that finishing a work of art, whether it be drawing, painting or novel, can be the hardest part.

The problem, especially in watercolor or drawing, is that the white of the paper is a very valuable part of the artwork. Once it is gone it is generally gone for good, and yet it's necessary to keep a fresh look to the work. So as you get to the end you get a little more cautious about using up the remaining white space. It's sometimes tempting to just leave the white of the paper, which can sometimes still read as part of the illusion of reality rather than just as blank paper. The second version of this drawing, seen in my last post, is like that. I THINK that the upper background reads as a light filled space, not just blank paper.

But I wasn't sure and it certainly did not give any indication of the spartina which is part of what makes the salt marshes of Cape May so handsome. So, knowing I might very well kill the drawing, I went ahead today and added the background. As I developed it I removed more and more white paper. Hopefully it works and is an improvement. I do think that the Yellowlegs now seems better unified with the background and foreground. It will take awhile for me to decide. If not I'll remember this lesson next time. The lesson of not removing too much white is I think a lesson that artists never stop relearning.

But why write about all of this? Well there's certainly the danger of talking art to death. On the other hand I think non-artists might be interested in the many decisions that go into making a work of art. So maybe I should change my post title to this: "Don't Kill that Drawing......with Talk or with Charcoal".