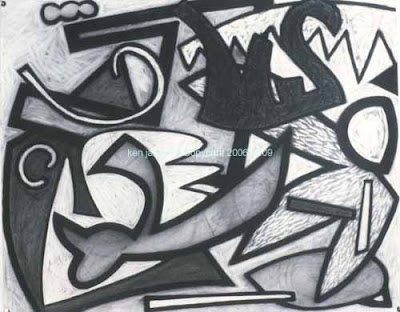 Many months ago I wrote about some of my drawings being used in a film. 'APeacockFeatheredBlue' debuted about a month ago and was recently in the Atlanta Film Festival. I wish I could have been at the filming and felt more a part of it. But I couldn't so it was with great anticipation that I received a copy of the film a few weeks ago. It was quite enjoyable both to see the short film and to see my own drawings in it. A trailer for the film can be found here. If you look at it you'll see Marcel, the young hero of the film, working on a drawing that I began, at two points in the film. In another section you'll see his mother ripping down two of my drawings from the wall. They are supposed to be Marcel's and are indicative of his problem: spending too much time on art and not enough on his other subjects, particularly science. In the rest of the film he uses his creativity and imagination to try to win the school science fair prize. 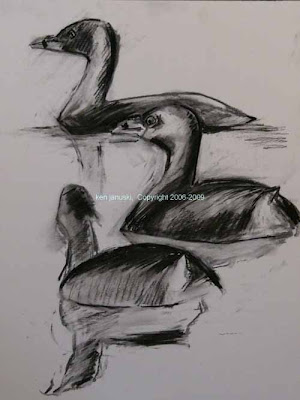 I've been a little reluctant to show any of my older, abstract work here because this is primarily a blog about my new work and nature. Since almost all of my recent work is about nature the two fit together nicely. But I also wanted to mention this film, and of course I'm proud of my older abstract work. So the debut of the film seems like a good excuse for including a very abbreviated artistic biography and perhaps showing how my abstract and representational art connect.

It actually was drawings like the one at the top that convinced me I could make the switch from 20 years of abstract work to representational work about four or five years ago. I had spent a number of years drawing insects under a microscope and they can be seen at my main web site. But I hadn't done any of birds and no representational or naturalistic paintings of any type. So it was still a huge jump to doing naturalistic work of the same ambition as my abstract work.

As anyone who reads this blog regularly knows I frequently lament my uncomfortableness with watercolor. But that is not the case with charcoal. The drawing at top was done during a period of almost 10 years where I did abstract charcoal drawings about 8 hours a day, every day. Charcoal drawing is in my blood. So I thought that I might be able to use that knowledge and ability on drawings of birds. The first attempt, of an immature Black-crowned Night Heron, was clumsy but it gave me the confidence to continue. The Pied-billed Grebes, above, is also a relatively early attempt.

I was satisfied enough with the results that I've not looked back. Soon after I'd done a few charcoal drawings of birds I decided to try watercolor. I'd only done a few watercolors as a student at Berkeley, but I remembered liking the medium. I think I was also inspired by many of the watercolors of birds in John Busby's 'Drawing Birds.' I'm nowhere near as ambitious in my naturalistic work as I've been with abstract work but I think that's more a matter of having enough time than anything else. I hope you'll continue to see better results here.

But there is another small part to this story. How did I come up with all of these abstract shapes? Why was I so enamored of shape? Like most artists I've done art since I was a child, including abstract or non-objective art. I remember admiring Wassily Kandinsky as a youth. But my youthful abstractions were largely geometric. Where did all the organic shapes come from? 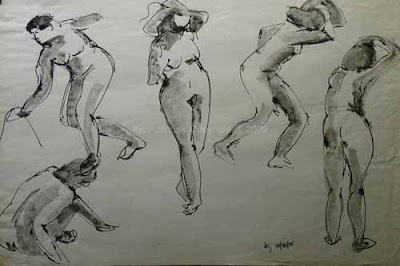 For that you have figure drawing to thank. I was living in San Francisco working at a very dull job in order to pay the bills. I had moved to San Francisco from Chicago and while there discovered that I really wanted to pursue my childhood ambition of being an artist. But how was I to go from a vague ambition to something real? Well it included study at City College of San Francisco, and later at University of California at Berkeley. But in between, every night after work I'd go to a three-hour figure drawing class sponsored by San Francisco Adult Education. I probably spent two years doing this (the drawing above is an example that I still have). And in doing so I think really trained my hand and eye to draw the shapes I saw.

Did this directly translate to the shapes of my abstract work or to my ability to draw the shapes of birds now? I really don't know. But I think the most likely answer is that it all came from here.

So there you have it: a short artistic bio. And a theme: from nature, to abstraction, and back to nature again. AND a film debut!

P.S. Speaking of biographies I did want to mention this new one by an author whose River Landing blog I follow. It's a short blog entry about how the author came to find his lifework in the natural sciences. I found it very enjoyable as I have with all of his writings.
Posted by Ken Januski at 10:20 PM

Hi Ken.... I hear you about the difficulty of working with watercolor. A friend gave me a book that I think you will find interesting. The book's title is The Horn Island Logs of Walter Inglis Anderson. Anderson's imagery is representational, but also highly abstracted...like your charcoals. He did tons of bird watercolors on Horn Island, off the coast of Mississippi. Anderson passed away in 1963. I like birds too..I have photos and styrofoam sculptures at this link: http://artistatexit0.wordpress.com/ all the best...Al

Thanks for the information on Walter Inglis Anderson. I was completely unfamiliar with him. Amazon has given me a brief glimpse of his work but I'll need to do a little more research.

I neglected to add in my post how much I love watercolor and people like Winslow Homer and John Singer Sargent. So I'd like to continue working in it. But right now the disappointments still outnumber the successes. Still hope springs eternal.

I've taken a quick look at your blog and enjoyed it. But there's too much there for me to write a quick response here. So over time I'll write something there, in its proper place. I do have to say it's a type of bird art that I haven't seen before!