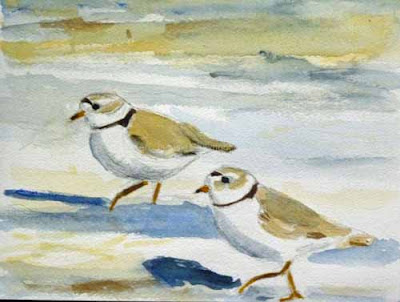 Please don't take this as gospel truth. The figure 1 of 1600 refers to the number of pairs of Piping Plovers on the East Coast of the U.S. It was a rough figure given to us by a field biologist at 'The Meadows' of The Nature Conservancy in Cape May, NJ. Further research online found an estimate of less than 2000 nesting pairs in 2008. Wikipedia says the total world population in 2003 was about 6410. So I don't know a hard and fast figure.

Nonetheless I hope my point is clear: in this small watercolor you are looking at only one of 1600 such bird pairs in existence on the East Coast and two out of a total population of 6410. They are rare, threatened, and special. How often can you look at something whose existence is so severely threatened? What should be done about it?

I won't go on about the ethics of this. I try to avoid such big questions on this blog. So all I will say is that I think it is a great mistake to let any species disappear, especially through neglect.

In talking to the biologist last week I and my wife expected that we would find that the greatest threat to the newborn plover chicks would be human. But that's not the case. Here Laughing Gulls and even Ghost Crabs are greater predators. Nature is complex and things aren't always what they seem. In terms of overall threat to all Piping Plovers I'm sure that loss of beach habitat is at or near the top.

Because Piping Plovers are almost impossible to see when they are not moving we were very fortunate to find them running around all over the beach like windup toys on our first day at Cape May last week. Photos taken then were the basis of the quick watercolor at the top. The next day we were out with a birding group and it was almost impossible to find the birds because most of the time they were sitting still. They are a tremendous example of protective coloration. If humans can't see them then neither can many of their predators. 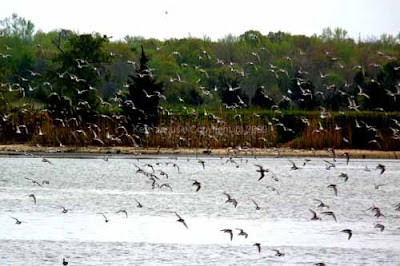 If the Piping Plovers are an example of 1 in 1600 Heislerville Wildlife Management Area showed the opposite, let's say 1600 of 1600 shorebirds in flight all at the same time. When we first arrived at Matt's Landing at Heislerville last week we saw a number of shorebirds standing in shallow water amidst thousands of small brown, rounded rocks. It was only when I focused my scope on the 'rocks' that I realized that they were birds! Almost all of them were dunlins.

When the shorebirds fly, as in the photo above, they create the equivalent of an optical illusion. There is an explosion of flickering movement, light and shadow. It is really an extraordinary experience. More extraordinary, on a less visceral level, is the knowledge that here, in contrast to the Piping Plovers, you are experiencing nature's profusion. Though again this is misleading. I'm not an expert on shorebirds. In fact I'm pretty new to them. But my guess is that the birds seen here, dunlins, short-billed dowitchers, black-bellied plovers, semi-palmated plovers, semi-palmated sanderlings and greater yellowlegs are also in decline. So unfortunately the sense of profusion is somewhat false. There is no denying the number of birds seen. And it is thrilling to see them, as they stop briefly here on their way to the Arctic tundra to breed. But they are far fewer than they were in the past. Still it was a tremendous sight to see.

One of the extraordinary aspects of Cape May, NJ for birders is that there are so many different birds in different habitats. So although I've talked mainly about shorebirds in this post, we also saw warblers, other passerines, hawks, ducks and other birds in great numbers. This is good and bad. The good is the experience of nature's profusion. The bad is the realization that forces such as geography funnel birds to the Cape May area so that you see an abnormal representation of the bird population. But my feeling, like most others I imagine, is to be thankful that we can take advantage of it. For anybody who does wish to bird the Cape May area I'd highly recommend 'Birds and Birding at Cape May' by Clay and Pat Sutton. And if you're there don't miss the walks given by the Cape May Bird Observatory. As a woman we directed to the CMBO walk at Heislerville told us afterwards: "That was the best six dollars I ever spent!"

I brought along my art materials but didn't have time to do anything but take photos. So I'm sure I'll be posting a lot of new work based on them. But I also intend to make a greater effort to do more work from life. One thing that hit me as I looked through all the photographs I took is that, though I liked many of them, even the ones I liked looked like, well......., photographs! They do not look like what I saw. For that there's art!
Posted by Ken Januski at 10:47 AM

This is a beauty, Ken! Simple well calculated strokes of color that are fresh.

The Audubon Club here is always doing a study of the piping plovers. HHI has become much more of a tourist and retirement destination in the last 15 years. Housing and the general influx of people are helping erase habitat. Interesting about the laughing gulls and ghost crabs. I'm sure they take a toll here too, along with the dogs that are allowed to run free on the beach from September to May. The earth is shrinking big time!

Sounds like you had a great time - hope the high lasts :)

I'm glad you like it. As I was telling my wife this afternoon after she said she liked it, it's all too easy, especially for me, to get too finicky with watercolor. I think that here I kept it simple and maybe it shows. I do love watercolor but it continues to be a learning process. Of course that is part of the challenge.

We're very lucky that we live so close to Cape May. If we didn't have to line up a cat sitter/medicine giver every time we go we'd probably go more often. Generally we go in fall but I have to say spring has a lot to recommend it!

I think the biologist at The Meadows was really referring more to mortality rate of chicks than the survival rate of Piping Plovers as a whole and I probably should have indicated that in my post. I'm sure that the loss of habitat is a huge cause of the overall decline of Piping Plovers.

Sad to say you are right, the earth is shrinking big time. Just how many years ago did Joni Mitchell sing about paving over paradise and putting up a parking lot? It's very sad to see.

The piping plovers are lovely. I have a soft spot for sandpipers and plovers, having studied them a bit in Maine years ago including some banding and then watching them feed on mudflats during migration.

A few pairs of piping plovers nest along New Hampshire's 18 miles of coastline. I recall reading an editorial in one of the local papers a few years ago; the editors were lamenting the inconvenience to people of having to avoid the plovers during nesting season. They wondered when people would stop having to sacrifice their public spaces for birds. After reading that, I wondered if the editors had ever considered the extent of human development and habitat destruction along the eastern seaboard. Not many spaces left for plovers or anything wild. In New Hampshire, feral cats are a problem for the little plovers. And even the feral cat lovers are sometimes adverse to raining in the wild feline population.

It makes me smile to see your watercolor and picture the plovers running across the New Jersey beaches or hiding on their nests. May good camouflage keep them safe.

I'm all for bringing smiles to the faces of my readers!

I don't have high hopes for my blog as a political instrument and that is not its goal but I do hope that at least a few readers will think twice about the fate of the Piping Plovers after reading this post. Unfortunately I think only like-minded people will be reading it. But you never know....

My wife gets very agitated about people who decide to get a pet and then abandon it soon after or keep it but do not treat it properly. I think those people are probably similar to the people who are angry about the inconvenience of avoiding plovers during nesting season. There is a huge selfishness that just never sees animals as living beings. They are more like inanimate objects, say plastic lawn furniture or stoplights, to be treated cavalierly. You can only hope that at some point they learn to experience them differently. Fortunately it does occasionally happen.

As far as the plovers, as you say, may camouflage keep them safe.