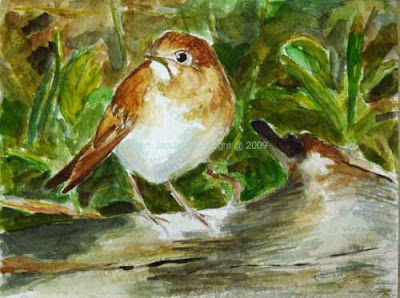 Thrushes are one of our 'old favorite' birds. In appearance they are attractive though probably not as splendid as some birds, especially warblers. They are comfortable and familiar, and always pleasant to see. In song it's nearly impossible to beat them but that is another story.

We often see a lot of Veerys in Shenandoah National Park. And it seems, though I could be wrong, that we see fewer and fewer Wood Thrushes there each year. By contrast here in Philadelphia we're fortunate to have a nearby woods that is always full of Wood Thrushes in breeding season.

The Veery above was a young bird, seen in Shenandoah National Park in May, 2009. Some of my very first watercolors when I took up watercolor about three years ago were also of Veerys seen and photographed in Shenandoah. I'm happy to say that I have made progress, at least in the Veerys themselves. The background has improved a bit, but it's still pretty impressionistic. What struck us about this bird when we saw it was the very minimal breast-streaking. Though Veerys always look somewhat innocent he seemed more that way than most. I'm pretty sure that was due to the lack of streaking and paler, younger face. 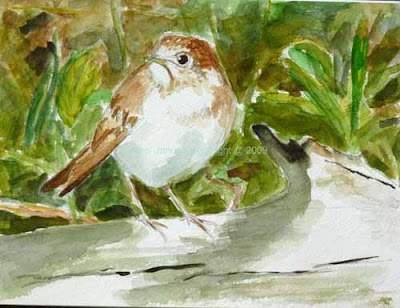 The photo above was the first version. After I took a photo of it and looked at it more closely I realized it was completely missing the warm rusty wash that colored the young Veery. He looked far too cold. I also didn't like the stark light/dark contrast on the log on which he stood. As I've said many, many times here I always tend to use up the valuable white of watercolor paper much too quickly. Then I'm stuck with a dark, less than vibrant, less than fresh watercolor. In this case I probably saved too much. So in the final version at top I toned down the contrast quite a bit and used up more of the white of the paper. 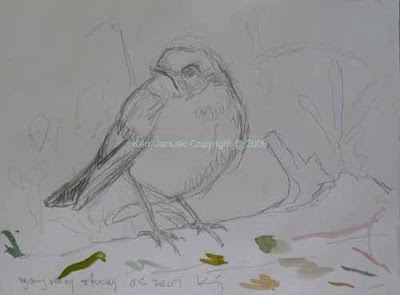 This last photo is just a preliminary sketch that I did from the photo before beginning the actual watercolor. It's mainly just a warmup exercise and an attempt to place the subject on the paper. You can see a darker area in the wings, where I needed to do some reworking to get them properly positioned. I also used it to test out some of the colors that I planned to use on the actual painting.

So what is it that makes this Veery a 'Limberlost' Veery? That's easy. We saw him on the Limberlost trail at Shenandoah. This used to be one of our favorite trails, full of very old, and very large Hemlocks. But Wooly Adelgids have killed off all of those old trees. They were saved more than one hundred years ago from the lumber mills by a owner with some environmental foresight. But that couldn't save them from invasive pests. Though all the literature suggests that hemlock loving birds like Blackburnian Warblers and Acadian Flycatchers are common there we haven't seen any in years. Blue-headed Vireos are still plentiful but it seems like birds of pioneer forests are more likely. The Chestnut-Sided Warbler is plentiful. In any case we saw this handsome young Veery on this trail. That gave me the opportunity to say a little bit about the history of Limberlost and its wonderful hemlocks.
Posted by Ken Januski at 5:42 PM

Ken, This is a true gem. Colors are vibrant, the lighting on the bird and depth achieved with the background so makes this piece. And, you've captured the action of the Veery. A very Verry lively piece :) This needs a frame and don't forget to make note cards! Hint, hint.

P.S. I like impressionistic backgrounds for birds. It makes them shine and after all, they are the stars :)

Thanks so much for your comments! I liked this painting when I was done with it but it's always nice to get another more objective, positive opinion, especially one that's so positive.

One thing I did with this one was make a more detailed drawing and then be much more deliberate, and restrained, in painting the veery itself. I think that helped. But it was only when I photographed it and looked at it that I saw how cold it looked. So that convinced me I needed to do more work, especially since it was the warm orangeish wash of the young veery that caught my attention in the first place. I think going back into it really helped make it seem vibrant.

Winslow Homer to me is the greatest example of how you can use very impressionistic background and still get a very beautiful and still realistic watercolor, especially in his more mature works. I think more than anyone he might have sold me on all the possibilities of watercolor. Otherwise I might have given up long ago...: -)