Keeping My Hand in the Game 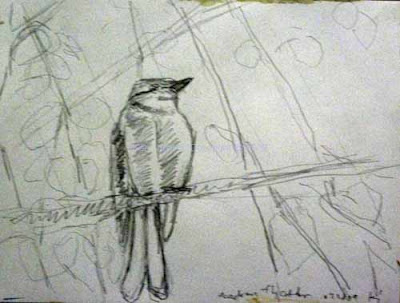 This will be a quick post before heading off to work. I've been getting in the habit of doing some art work most mornings and I'd like to continue. However I rarely have time to drive somewhere and work from life so most of my work is based on photos that I've taken.

I use a Strathmore Field Sketchbook for many of my watercolors. It includes interleaved lightweight sheets of drawing paper and heavier watercolor paper. I use the first to map out the composition as above. 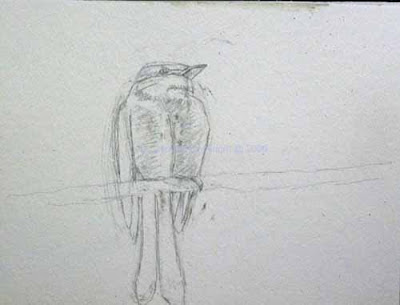 Then I use the second to do the actual watercolor. Hopefully the sketch on the watercolor paper includes something that I've learned from the first sketch. In this case this is my second version of a painting from this photo or one similar. The first was an abysmal failure. One problem is foreshortening. I'm looking up at the flycatcher. The second, and this is a problem with photos, is that the tail doesn't seem centered under the torso. It's off to the left. If I were drawing from life I'd know whether this was correct or not. But here I'm left with the evidence from the photo. I know that it's highly unlikely that the tail really was off center. But it could have appeared off center. Most likely it did, though I don't know how. In any case this first version of the new watercolor remains fairly true to the photo.

A bigger problem will probably be the background. I've roughly sketched in what I'd like to do in the first sketch. Only time will tell if I'm able to accomplish it in the actual watercolor.
Posted by Ken Januski at 10:12 AM