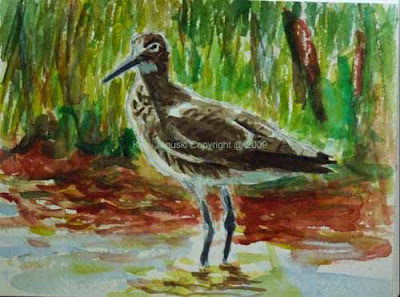 I believe this small watercolor of an Eastern Willet seen at The Wetlands Institute in Stone Harbor, NJ this year is done. I'm satisfied with it, especially as it's my first painting of a willet. More than most artistic mediums though, watercolor doesn't do well with a lot of reworking. So even though there are some parts that bother me, I think it's best to leave this as it is, while it still has some freshness.

Though Eastern Willets are fairly common shorebirds we'd only seen them a few times before, the first time being when we took a Cape May Birding Observatory workshop on spring migration. They have never been all that close. On our trip to Cape May this April they were all over the place. This bird was only about 10 feet away. So it was nice to be able to get such good looks at them. They are a fairly nondescript bird for a shorebird, though their bluish bill and legs are noticeable. Their feather markings though are pretty much the same all over. There are no noticeable areas of contrasting color that stand out. At least not until the willet flies when you do see a huge white stripe on the wings.

Now that I'm starting to force myself to work from life I hope that my next paintings of Willets will include some work from life. Hopefully that will be soon!
Posted by Ken Januski at 9:33 AM

Great lighting and volume on the Willet! They do have very blah coloring. I love watching the interplay between them and Sanderlings. There have been some near collisions as the Sanderlings run from incoming wave action :)

I'm glad you like it. I'm happy with it. I'm trying to do more work from life as you know but sometimes I just have to revert to photos.

Hopefully we'll be seeing some more soon. We may go out tomorrow and should have some chance of seeing some shorebirds though I doubt it will include Willets. I'd settle for a Long-billed Curlew though!