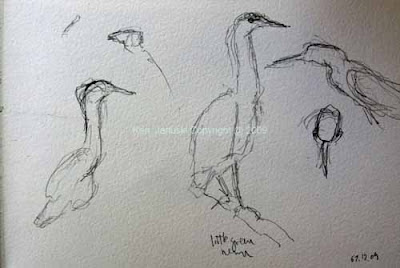 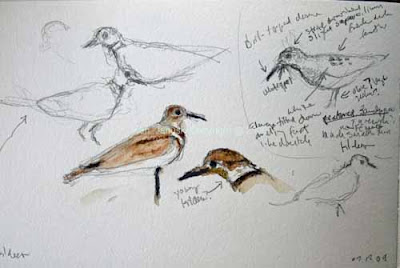 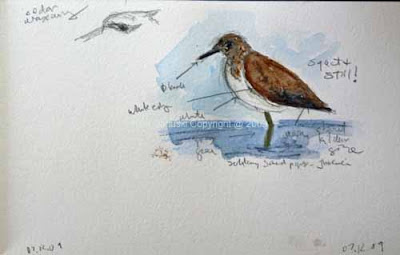 I continued my quest for more live field sketching today and was able to convince my wife to do the same! We spent about 2 1/2 hours at Morris Arboretum in Philadelphia. We hoped that we'd finally see a Green Heron there and sure enough we saw one very quickly and were able to get many looks and do a number of live sketches.

But the most exciting part of the trip was shorebirds. We're still beginners with shorebirds. We tend to see them at Cape May in the fall and this year in the spring. So we've finally started to at least have a handle on them. We generally can at least differentiate a sandpiper from a plover. As I've continued to read about them one truism I've run across is that they're migrating back south by July. But we never see them in summer. Maybe we would if we went to the shore in July. But we just don't see them in Philadelphia. 07.13.09 edit -> I should say "we don't see them." Others might. If we spent more time at Tinicum in summer I'm sure we'd see more shorebirds there. In fact we may need to test that theory very soon.

One of the pleasures of birding is when you actually see something that you've read about. That happened today when we found five species of shorebirds: Killdeer, Greater Yellowlegs, Spotted Sandpiper, Solitary Sandpiper, and Pectoral Sandpiper. The more we looked the more we found. I assume that all, except possibly the six Kildeers, were migrating. We had to puzzle through the Pectoral but I'm pretty sure that's what it is. It was smaller than normal but fieldmarks indicate that it's a female, which is smaller and migrates in mid-July. The sheet of Killdeer drawings includes the Pectoral in the upper right corner.

After looking at more guidebooks, getting a suggestion that it is a juvenile Pectoral, and looking at my notes (e.g. olive legs, always crouched, etc.) I'm now wondering if this could have been a Least Sandpiper. The clean line that ended the streaking on the breast convinced me it was a Pectoral. But it did seem sort of large for a Pectoral (which is one reason I thought female which are smaller), it was often in a crouched position like a Least, and the legs were sort of olive. And they seem to be early migrants based on what I've read. So many things point to a Least. Except the clean line on the breast streaking, which still indicates a Pectoral. So even with all my sketching and notes it may remain unknown for certain.

There's also a bad sketch of a Solitary Sandpiper. What's worst about it is that I've lost all of the white on head and neck. So it's both dull to look at and wrong in fact. Nonetheless I noted enough details as I drew it to clearly identify it when I went to the guidebook.

Which leads me to another reason to sketch birds: so that you SEE them better. There is an ongoing discussion on the PA Audubon birding list today about whether it might be wise to buy a good camera before good binoculars if you have an interest in birds. Most people chose binos, and I certainly would, but some people suggested a camera. My suggestion: buy the best binocular you can buy, and a sketchbook. Drawing a bird forces you to LOOK at a bird and make decisions about fieldmarks that you don't have to do with binoculars and surely don't with a camera. I was even reading elsewhere about people shooting photos and then going home and comparing them to a guidebook to figure out what they'd seen. This seems crazy! The beautiful thing about sketching, regardless of your ability, is that it forces you to look more closely.

I was tempted to ask the person who wanted advice on binoculars or camera if he wanted to bring home anything from the experience. If you want to bring home a trophy a camera will work, though you'll probably be unhappy with the quality of your trophy. It's not that easy to get a good photo. But if you want to bring home a better understanding of birds, an improved ability to identify them, and maybe an art work, then buy yourself high quality binoculars, AND, a sketchbook!
Posted by Ken Januski at 2:55 PM