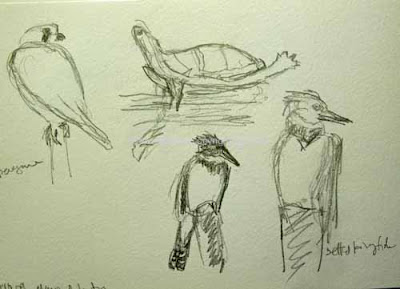 Sometimes you get perfect October days. Today was one of them, sunny, clear, somewhat cool and brisk, at least early on. All in all a beautiful day to be outside, and just too beautiful to be inside, regardless of what sports might be on TV.

I'm testing out a new scope. I've decided that I really need to improve upon my ancient Bushnell Spacemaster, mainly for drawing purposes, though I'll obviously use it to ID birds as well. In any case I was testing out a 60 mm today at Morris Arboretum. No sooner did I have it set up and on tripod than we stepped across the road from the parking area to the wetlands and saw a small hawk land on a dead tree in front of us. At first I thought American Kestrel but the colors were a bit off. A dark raw sienna brown rather than the rust of an American Kestrel, and none of the Kestrel's blue. As I drew it and the sideburns immediately beneath the eye it seemed more likely that it was a Peregrine, not a Kestrel.

I'm not that familiar with Peregrines, and have never seen one so close. Further study of our Sibley guide confirmed that this was an immature bird. He flew off quickly, probably after a migrating passerine lunch. We didn't see any further evidence of him until we were just about ready to leave and a large bird winged powerfully and swiftly after a songbird. The speed and power left no doubt as to what it was.

The rest of the day I continued to test out the scope. But all the migrating sparrows we saw just weren't all that cooperative; here one second and gone the next. What we saw for sure: Savannah, Swamp, Song, House and White-Crowned Sparrows. What we might have seen: Lincoln's and Vesper. One bird had a lot of the buff of a Lincoln but I didn't see it long enough to see if it was also on the chest. I think it was but hate to identify a bird I'm not sure about. Another light colored sparrow, something like a Savannah, but with a pronounced white eye-ring might have been a Vesper Sparrow, a bird we've never seen. But again he was just gone too quickly. So he remains a tantalizing close ID, just not close enough.

For my wife, Jerene, and myself, there is no enjoyment in claiming to see a bird we're not absolutely certain of. The enjoyment comes in clearing seeing and identifying a bird. So both the Vesper and Lincoln from today won't go onto our checklists as such. One day, hopefully soon, we'll get a good look and enjoy our ID much more.

The Belted Kingfisher, one or more of which is generally obvious at Morris, played hard to get today. As we neared time to leave though he gave me a good, long view in the new scope. That is also in drawing at top. If I'd been better prepared and it was earlier in the day I would have perhaps tried a watercolor.

I also include an unidentified turtle, most likely an Eastern Painted Turtle. I was taken by the way he had both legs stretched out behind him, though I only drew one of them here.

Other birds today included our first Yellow-Rumped Warblers of the fall, more Eastern Phoebes, and innumerable Goldfinches. As I said a beautiful day to be outside. This is fall at its best, made even better by drawing birds from life through the lens of a new scope!
Posted by Ken Januski at 4:25 PM

Great day you had birding, and what a treat to see the Peregrine!

I see that we are now scheduled for nights in the 30s. So maybe it was a good thing we got in that perfect October day when we did! Looks like it's going to be a bit wetter and colder than that for next few days.

But it was a great opportunity to test the scope. I couldn't believe it when the first bird we saw with it was a perched Peregrine.