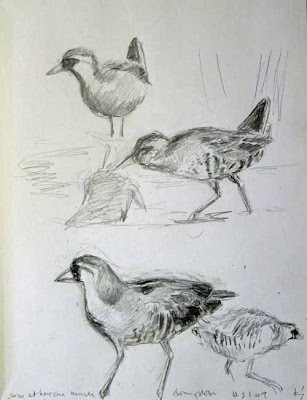 One of the great pleasures of our trip to the Midwest a few weeks ago was the number of Soras that we saw at one particular spot at Horicon Marsh. Soras are a once a year type of bird for us, generally off in the distance. One night near dusk on this trip we had three in our binoculars at the same time, just a few feet away.

I only did one fieldsketch of them and it wasn't much. The photos weren't great either because Soras are very skittish. Nonetheless I got enough blurry photos to use as the basis for this page of sketches. Eventually they'll form the basis of more complete paintings or drawings. 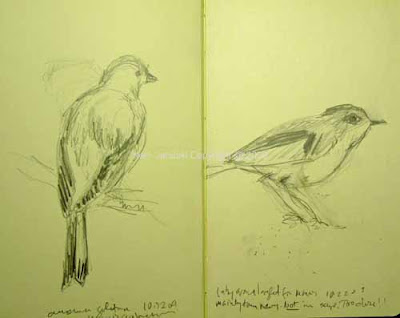 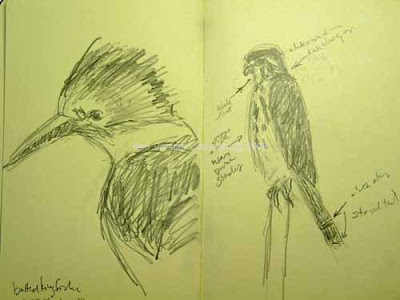 I also managed to get some more fieldsketches done the other day at Morris Arboretum. They include a Kestrel, Belted Kingfisher, American Goldfinch and Ruby-crowned Kinglet. As usual the Kinglet would not sit still and I didn't see it for long. During that time I didn't notice where the legs were. Looking later at the newest edition of Roger Tory Peterson's field guide to American birds I saw that he had them much further back than I did. So I moved them a bit here. Still need to do a fieldsketch that really focuses on this though.
Posted by Ken Januski at 10:29 AM

I love your field sketches, beautiful drawings. I think using a video is a great idea to draw from, I haven't looked at where you live, but I know here in England it isn't always possible to be outside drawing. I have tried in the garden but the birds won't stay yet!

Here in Philadelphia, PA in US we're just getting to the time of year when it's just not very comfortable drawing outside. And like yours my garden birds are horrible misbehavers, never sitting still long enough for met draw them. But each winter I vow anew that I will draw them anyway. This will be year number three at the task. I hope to finally be successful!!