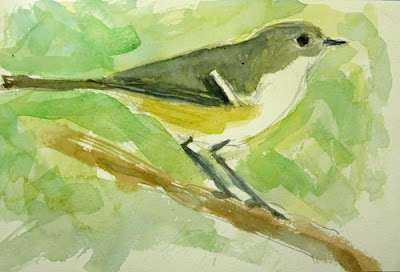 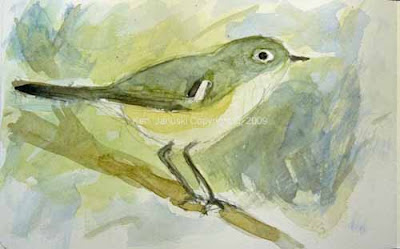 When I first started writing about my birding and art adventures about two years ago this month one of the first things I wrote about was seeing Ruby-crowned Kinglets at the Wissahickon Creek in Philadelphia. They are so oblivious to humans that they'll almost land on your head. But they don't sit still at all. As close as they are I could never do a decent drawing of one, even though one has actually wintered in our backyard for the last two years. I documented some of the problems in a previous entry.

Late yesterday afternoon at about 5 p.m. I decided to try to rescue an hour out of the fast fading day for birding. I was greatly rewarded. At least one flock of 10 Ruby-crowned Kinglets was busy flitting from branch to branch. As they would disappear and I walked on I kept running into more.

I debated bringing my camera. But I decided against it. Anything I saw was going to have to get recorded in my sketchbook. I'm so glad I did. It forced me to look at the kinglets and draw them. As with my experience with Eastern Phoebes a few weeks ago no sooner would I put a mark down for the head than the bird would fly. So then I'd look for another one and continue with what I'd missed.

So I think this post is aptly called 'stalking.' That really is what you do when you work from life. You know that your view won't be for long so you grab what you can then again become on the lookout for a new view. There really is something exhilarating about this. You learn to see birds in a way that you never have before. What it comes down to is that you don't just see to 'identify' but you see to 'memorize' so that you can draw from a mental image.

The watercolors at top are painted entirely from a mental image(see below for why there are two versions). Both are quick, done in less than 15 minutes. They're based on the sketches I made yesterday but coupled with knowledge I picked up from looking at guidebooks and photos when I got home. Those sketches are below. 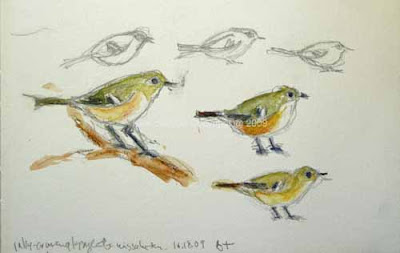 I didn't use any color while I was sketching and so all of the color was added later at home. There are a lot of mistakes here. Parts of the physiognomy is wrong. Some of the colors are wrong. But it is all a learning process. Over time, if you're lucky enough to keep seeing kinglets, you finally get a good 'mental image' of them. I haven't reached that point yet. But the process is one that greatly adds to my birding and artistic enjoyment.

And, FINALLY, two years after I first started I think I have a decent representation of a Ruby-crowned Kinglet, drawn from life, or at least based on sketches from life. I never guessed it would take this long.

OOPS!! I kept thinking that I was doing a bad job on the wingbars. I knew that the white bar wasn't quite large enough. But the problem was more than that. If you look at the sketches I did you can see that the wing bars slant in different directions. One is correct and was drawn as I saw it. The other is incorrect and drawn from memory. Unfortunately the watercolor at top, drawn completely from memory, makes the same mistake: the wingbars slant in the wrong direction!! I've now added a very quick new watercolor with the wingbars corrected.

Well that is one of the problems with working from memory. Your memory can be faulty. But still it seems better than working from photos. As I said some of the field sketches are correct. In others I must have sketched in the wingbars as I remembered them. It won't happen again! But even if it does it's not a disaster. The most important thing is to be drawing based on live engagement with the actual bird. The most troubling thing I've found with working with photos, over many, many years, is that you're engaged with a static two-dimensional representation of something. When working from life you have a dynamic engagement with an active object, fully three-dimensional and always about to move. That adds an excitement to the drawing that just can't be gotten from photos.

I do think that photos can add greatly to testing the accuracy of my visual memory. But they are far better at this job than at the one of being the actual subject of my art.
Posted by Ken Januski at 10:00 AM