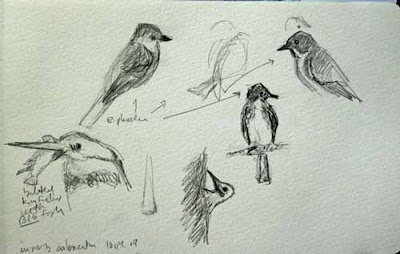 These two field sketches from today at Morris Arboretum won't set any records for good bird sketches. Nonetheless I loved doing them! Today was the first time in a while that I had a block of a time for nothing but field sketching. And it was a beautiful sunny day in low 70s.

Most of the first birds I saw were American Goldfinches, but then I started to see Eastern Phoebes, first one, then two, then possibly more. Time to sketch. But like most birds they don't sit still. So I got maybe part of the head down, and then the bird I was drawing moved. Same thing over and over. But this is the important part. Once the bird moved I had no idea how to finish off the drawing. I had only the vaguest notion of what a generalized Eastern Phoebe looked like. How did the whole bird fit together? I had part of the head but how did I draw the rest and still have it look like a Phoebe? I had no idea!

I just hadn't really looked closely enough at Eastern Phoebes, even though I've seen hundreds of them in my birding, to have a mental image. More than anything else this is the value of drawing from life I think. You're forced to realize all that you don't know about the mental image of each bird you see, and then you try to do something about it!

So the Phoebe head on top left is actually based on seeing a number of Phoebes today on various trees and bushes. Each time one flew I realized what I still didn't know about a Phoebe shape and I looked for it the next time I saw one. This went on for 60-120 minutes. I still don't have a fully formed mental image of an Eastern Phoebe but when I started today I had none at all. That is the value, AND the tremendous excitement of drawing from life.

I decided to take a break, have my lunch of apple and cheese, sit down on my portable stool, and set up the scope to match my lower height. I didn't expect to see anything while I did so, especially as I moved to a shady area where I'd seen few birds but which would be comfortable. As soon as my hands were greasy from the cheese I heard the rattle of a Belted Kingfisher.

There in front of me, centered in the scope, was a Belted Kingfisher, trying to eat a fish that was too big for him!! That's the drawing at lower left. I was so focused on getting the bill right, with fish in it, that I completely missed the crest. Was it not up as is usually the case? If so why didn't I draw it? I have no idea and only noticed the problem when I showed the drawing to my wife when I got home.

But that's really no matter. It will be harder to do any sort of finished work from this, but not impossible. The important thing is that because I got so involved with trying to draw what I saw that I have an emotional attachment to it, something I don't think occurs when I take photos. I had my camera with me, but I'm much happier that I tried to draw this struggle of Kingfisher with oversized fish rather than snap a few photos.

The last drawing on page is a Northern Flicker whose head just barely peaked out from behind a tree. Even this was instructive in getting me to see the curve of his bill. Not that I got it right in this or the next drawing. But it made me uncertain enough to do more research when I got home. 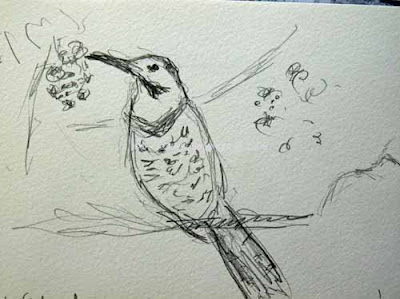 As I got to my last half hour before I needed to leave a large bird landed clumsily in a tree not far from me. Cuckoo!? No, the loud clumsy arrival made me think so but it was another Flicker. That is the bottom drawing. He remained in front of me for a long while but constantly changed position. So the first pose I sketched in never really appeared again. Now the tail looks odd. Again no matter. I drew what I saw and kept using the additional knowledge I gained from each new look to try to improve the drawing.

Among the things I noticed: all the spots on a Flicker's breast. Though I've also seen hundreds of them I'd never really focused on this. What I didn't notice: what the underside of the tail looks like. I got the shape but he'd moved before I saw the color. Only when I got home and noticed the beautiful drawing of a Northern Flicker that graces the front of the newest version of Roger Tory Peterson's field guide did I see that the dark I saw is only on the outside of the tail, especially at the bottom.

So all in all these sketches are mainly a record of what I don't know. That should be depressing. Instead it's invigorating! I'm starting to learn to really look at birds. And that's the way to do high quality drawings and paintings of birds.

I'd encourage all bird artists to spend more time on it!
Posted by Ken Januski at 8:10 PM