Day of the Wigeons - Holiday of the Ducks 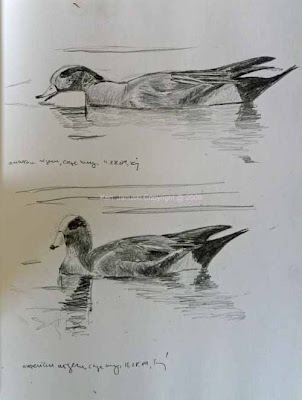 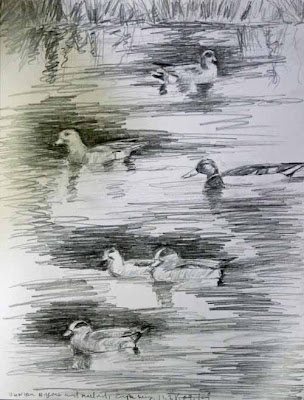 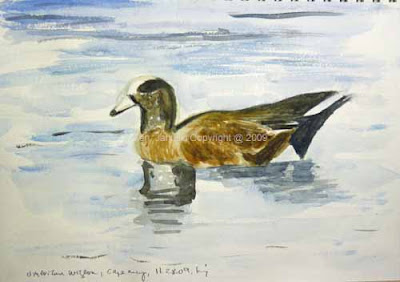 I looked forward to this long weekend because I hoped to be able to devote a fair amount of time to it to art. After my unsuccessful Northern Shoveler watercolors I decided I needed to spend some time doing detailed sketches of ducks. So yesterday I concentrated on Northern Shovelers. Today it was American Wigeons.

For many ducks can be dull birds. When we were at The Meadows of Cape May in October we ran into someone who was using the trails for bike riding. He had no interest in birds at all. Until we showed him some ducks magnified 30x in my spotting scope. I think he left a believer. Ducks are incredibly beautiful birds, especially in breeding plumage. The one problem for an artist is that the patterns can be so complex that to render them truthfully seems almost impossible. Thus these drawings. My hope is that in doing them enough I'll eventually understand both the structure of ducks, especially in regard to feather tracts, and find a shorthand for their complex patterns.

Today's works like yesterday's are all based on photos that I took. With such beautiful birds it's been a pleasure to work on them. At some time, probably weeks away, I'll try to do some more developed works using ducks as subject matter.
Posted by Ken Januski at 6:30 PM

...like your duck studies in this post and the previous. I too am studying the ducks. I don't know them as well as I'd like. I had lost track of your blog, but I was just at Amazon and was looking at the book, "Drawing Birds," when I saw the review you left! Good thing!

Well glad you refound me! I have to say it was reading 'Drawing Birds' a number of years ago that planted the idea in my head to start doing bird art. I was just so impressed with both the writing and the works illustrated. And I still am.

I was hoping to see an exhibit of John Busby's work at the Birds in Art show at the Woodson Museum this fall. But wouldn't you know: we drove 2 1/2 hours out of our way while in Wisconsin only to find we went on a day the museum was closed. It was our fault for not paying more attention but I sure would have liked to see his show and the entire BIA show.

I'll have to stop by soon and see the progress of your work.

Lovely drawings. I really like the middle one. It has a lovely lively feel of the birds moving around on the water

Thanks Pam and Chatters. Oddly enough now that I've looked at these for awhile I'm coming around to liking the watercolor the best, though I do have to say it looks better in reproduction than in real life. The pencil sketches probably look better in real life.

My plan is that all these pencil duck studies will eventually lead to more developed watercolors. We shall see.....