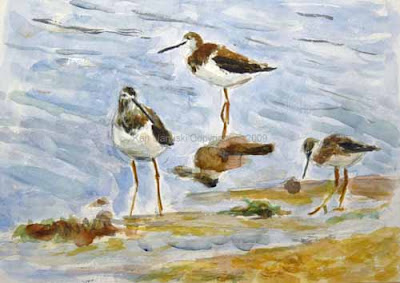 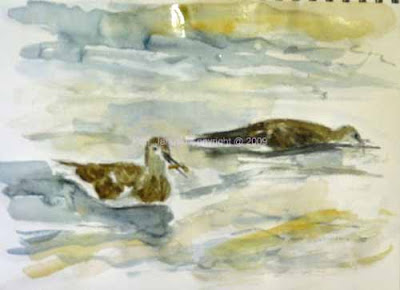 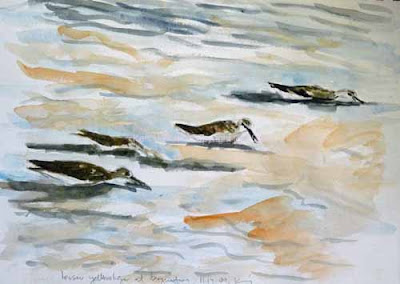 As I've mentioned a few times over the last 3-6 months I spend a lot of time at the Wildlife Art section of birdforum.net. There are a number of bird artists/just plain artists there whose work I greatly admire. I've also gotten more exposure to some artists, especially British, whose published work I admire.

The problem is that though their books are available online most come from England and the shipping is steep. I've had a hard time finding their work in the U.S., especially as new books. But this week I started poking around Abebooks and found many of their works available used in the U.S., for very reasonable prices.

Yesterday I got two of them. One, Birdscape, by Bruce Pearson and Robert Burton really struck me in terms of this blog. The authors visit, and Pearson draws and paints, six of the best birding spots in Great Britain. What struck me, outside of the quality of his work, was that there is little information on how he goes about painting, or even what media each illustration is in!

This is in stark contrast to this blog, where I've deliberately changed to include more information about technique and less about subject over the last six months. I realize in doing so I may be losing readers. But I also know that I know more about art than about nature. Nonetheless the Bruce Pearson book has given me something to think about! So eventually I may put in a little less about my technique and process.

That said I do want to explain the top watercolors. They show Greater Yellowlegs seen at Brigantine NWR in October, 2009. All are based on photos. The top one was done in about an hour and tries to combine some of the detail of my recent sketches with the spontaneity of very quick watercolors.The next two were done in 15 minutes, not counting the 5 or so minutes sketching in the birds. My intent was to force myself to work quickly, as in the recent Sora watercolor, so that I might be a bit freer with watercolor. All are done on pages from an Aquabee Super Deluxe sketchbook. I used it because I'd been told it was good for sketching but could also hold some water. And that was true. It buckled a bit but not a badly for sketchbook paper.

For me watercolor remains a difficult but still rewarding medium. I plan to do some more of these timed watercolors. I hope that the combination of detail in the recent pencil sketches and looseness of the short watercolors will eventually meld into a pleasing and successful whole. 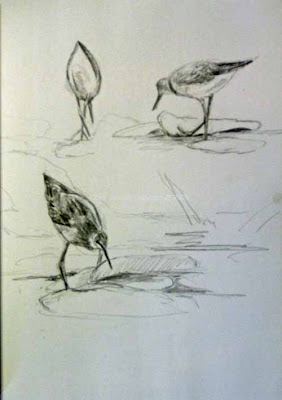 Above is my last Lesser Yellowlegs sketch. It's so odd to move from the precision of it to the imprecision of watercolor. But eventually I'm sure it will all come together. In the meantime I'll look at artists I admire, like Bruce Pearson, Lars Jonsson, Tim Wootton and Nick Derry.
Posted by Ken Januski at 1:24 PM

Lovely account of forages into watercolour and I do so comprehend what you are trying to do :D

Yes watercolors remain an adventure! I guess better an adventure than boring but still it would be nice to finally become comfortable with them. I guess I need a whole lot more of the 15-minute paintings.