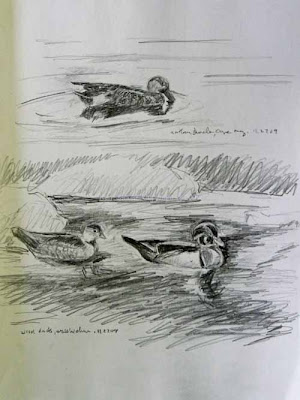 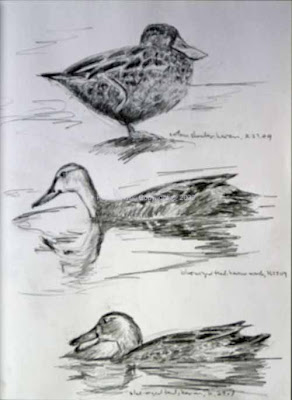 My recent watercolors of Northern Shovelers left me disappointed. I realized that part of this might have been due to the fact that I really don't know ducks all that well, either through seeing them or through drawing them. Sometimes when that happens I have a tendency to just go ahead and paint them anyway trusting that some magical powers of the brush coupled with my past artistic experience will pull off the little trick of making it look like I know what I'm about.

Sometimes it works and sometimes it doesn't. It didn't with those two watercolors so I decided to devote some time to doing detailed sketches of ducks. My hope was that it would improve my knowledge of ducks. Today's results are above. All are based on photos I took. They include the same Northern Shoveler from the watercolors in both sketches. Also included are two Wood Ducks seen at the Wissahickon in Philadelphia a couple of years ago and a Blue-Winged Teal seen at Horicon Marsh this fall.

As I've said many, probably too many times, I don't like working from photos. But as Colleen C. said recently on bird forum: better photos than dead birds as older artists used to use. Before binoculars, telescopes and cameras the only way to see the details of most birds was to have dead specimens. Looked at from that perspective it doesn't see all that bad.

But photos are always deceptive. No one actually sees as a camera does. We see much more dynamically and our other senses at the scene contribute to the overall visual impression. Photos don't have this. So they are useful for studying detail at times, especially in the colder months of the year when it's harder to work outside, but I'd be a lot happier to be drawing them as I looked at them in my scope. Next spring, or hopefully earlier.
Posted by Ken Januski at 3:44 PM