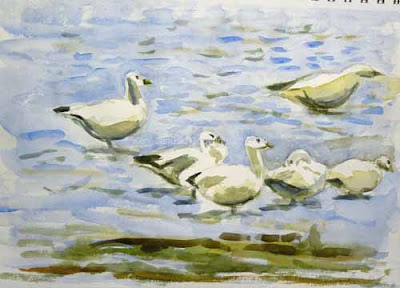 About a month ago I posted something on sketching the natural wealth of Cape May, NJ. It included a lot of live field sketches of birds seen around Cape May, including the wonderful Brigantine NWR about 50 miles north. When you're done visiting and tally up all that you've seen you almost always end with: Boy I saw a lot of different types of birds!

One of those birds is the Snow Goose, a bird we primarily see at Brigantine. Often we only see large flocks in flight, but this time we were lucky enough to also see some in the water and relatively close.

This watercolor is another in the series of recent quick watercolors. It took 15-30 minutes and is loosely based on a photo I took. If I wanted to get every bit of beauty, and detail, that is in a Snow Goose I'd be disappointed. Of course if I wanted that I wouldn't have tried such a quick watercolor on barely adequate paper. I am happy with this for other reasons: the main one being that I think it does create the illusion of Snow Geese in water.

Sometimes that is the most basic pleasure of art: illusion. With materials that may be primitive, sophisticated or somewhere in between you make marks on flat paper that somehow transform themselves into an illusion of the three dimensional world. I think this does that. What it doesn't do and what I have absolutely no interest in is create the illusion of a photograph.

If there is one thing more than any other that has made my shy away from doing wildlife art it's the prevalence of art that imitates photos but not nature. There is a big difference, though I think many people including many artists don't realize it. For me there will always be far greater pleasure in creating an illusion of nature, no matter how basic, than an illusion of a photo, no matter how detailed. Of course not all detailed art models itself on photos, for instance Durer and his hare. But much does and to me it is antagonistic to the vitality of nature. But it does sell and this may be why more artists work this way than would really like to.

This is also part of my recent training exercise of short watercolors. The purpose of that is to just get me feeling more free with watercolor so that I don't do tight, crabbed work. At some point it should lead to works that are more developed and more detailed. For now though I'm enjoying the quickly created illusion.
Posted by Ken Januski at 6:01 PM

Hi Ken
I totally agree with you, you do see a lot of nature / bird or animal art that almost looks like a photograph. Why I have to admire the technical skill that is used. I sometimes think what a waste - someone with so much talent could do some amazing paintings. Painting with vitality, like you said. Paintings that show the vitality and beauty of nature

I couldn't agree more about paintings that show the vitality and beauty of nature! And there are artists who do that but I'm not sure how successful they are compared to the photograph imitators. Fortunately some like Lars Jonsson do seem to be successful. So there is some hope!!