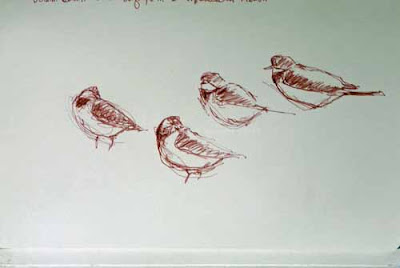 One of the truisms of field sketching of birds is that you should only put down on paper what you recall seeing. You shouldn't make guesses. I think the main reason for this is that you can then trust what you've put down, as little as it may be.

This makes sense to me. But I have a hard time following it. I always want to put in something like the wing bars, or the bill, or the legs, assuming that I can make a good guess as to where they were and what they looked like. Often, if not most of the time, I'm wrong.

I thought of this as I looked over the field sketches I did at Magee Marsh over the last two weeks. At the end of the day I'd often look through guides that I had, especially a Richard Crossley's new photographic guide, to compare sketches and photos. Inevitably I'd see where I had something wrong.

But, at least for me, I'm not sure that this is bad. There's something about seeing that you've made a mistake, and often published it, that tends to make you notice, and remember, what you've done wrong. So for instance I noticed that my generic bills are often too thin, or too short, that my wingbars are placed too high or low on wing of some species, etc. I'm not sure I'd even know this if I didn't put down what I thought I'd seen and then found out I was wrong.

So I guess there are two ways to look at this: one, a sketchbook is a compendium of things truly seen, even if only in brief segments; and two, a sketchbook as merely a tool in learning to see and to sketch. I understand and can appreciate both. But for me at least I do see a lot of value in the second viewpoint.

Oddly enough I thought of this at the very end of our trip. A wildlife rehab clinic had a display of injured raptors and owls in the Magee Marsh parking lot as we stopped to use the bathrooms on our way out. Bald Eagles, Peregrines, Red-shouldered Hawks, Saw-whet Owls, Barn Owls, etc. I had to tear myself away and resist getting out my sketchbook. But what really struck me was the way the peregrine lifted his wings up a bit, like a person shrugging his shoulders, and then let his wings hang down.

I'd seen and sketched this exact pose on an Osprey I'd seen last fall. But when I got it home it looked thoroughly wrong. The bird almost looked wider than high because of the width of the shoulders. But when I saw the peregrine I knew that this was what the osprey had done. So my sketch was accurate even though it still looks thoroughly wrong. So there's the other side of the argument: the value of putting down exactly and only what you see.

With that said the rest of my sketches. At top a number of Semi-palmated Plovers.

Below a quick sketch of a Tri-colored Heron and a Common Moorhen. 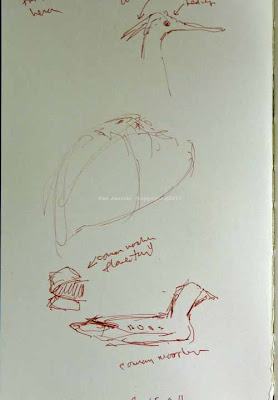 Below a 'Wild' Turkey, that acted as though is was a domesticated bird and not wild in the least. Still an opportunity I coulnd't resist. 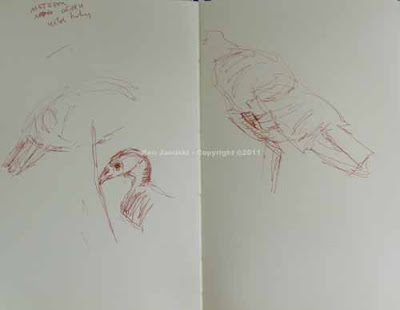 Below a Blue-gray Gnatcatcher, Palm Warbler, feeble attempt at Great Egret in flight, and a sketch of a female Cerulean Warbler. The last was interesting in that I actually using the sketch to make notes to help me ID the bird. It was only after I'd made this sketch that I and my wife, along with a few other observers, agrred that it was a female Cerulean. 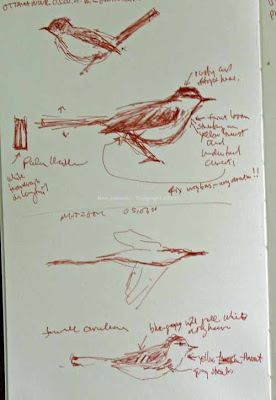 Below two of the last birds I sketched on our last auto tour of the NWR, a Swamp Sparrow and the first Willow Flycatcher of the year. 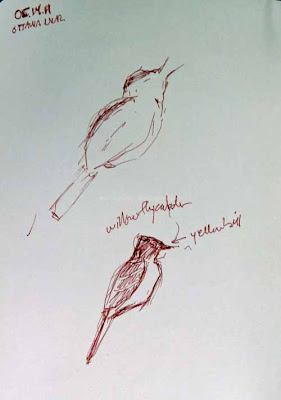 Below a Pied-billed Grebe, Lesser Scaup, and a lifer Horned-Grebe. The last surely seems worthy of a painting. I wish he hadn't been too far away to even think about taking a photo. 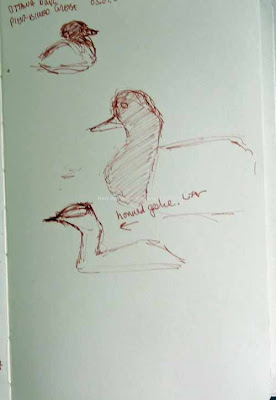 And finally another Chestnut-sided Warbler, Ruddy Turnstone and Least Sandpiper. Sad to say the proportions of the head of both Turnstone and Sandpiper are off. And I viewed both through a scope. Even then though birds don't necessarily sit still. I think that both moved and so I tried to finish them off from memory. In both instances the heads were just too small. Soon it will be time to refamliarize myself with shorebirds. 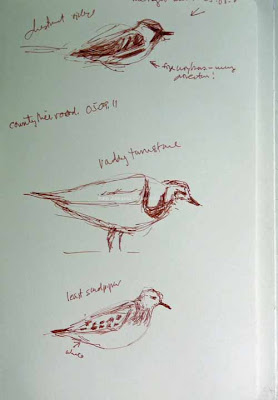 The last talk we went to at Magee was about fall birding in Ohio. The speaker talked about the more subtle beauty of shorebirds as compared to breeding Wood Warblers. It's true that they do have their own unquestionable beauty. But for now it's time to proceed with warblers I think. Shorebirds will come soon enough.
Posted by Ken Januski at 1:41 PM