Time to Paint Another Warbler 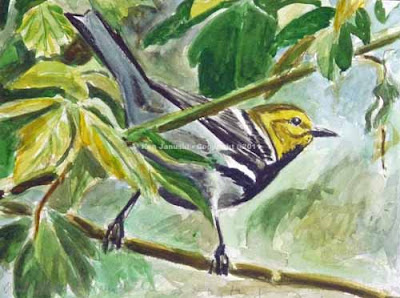 A few posts back I mentioned that it was 'Time to Paint a Warbler'. That was after numerous field sketches. This weekend, when it's really too hot and uncomfortable to do much outside, it seems like the right time to renew my attempts at warbler paintings.

I'll confess I don't like most warbler paintings I see. They either slavishly copy a photograph, having all the excitement of a photograph slavishly copied, do a fair job of creating a lively portrait of a warbler but then have no idea what to do with the background, if there even is one, or more likely do a watercolor, mainly in light washes, that looks like a pale imitation of what is really a brilliantly colored wood warbler.

Every once in a while, when I have such a dilemma, I'll pull out my baby elephant reproduction version of Audubon's prints of American birds. Rarely am I disappointed. But yesterday I was. From what I can tell Audubon didn't use as much the artistic imagination and adventurousness that he uses in many of his plates in these. Almost all are perched on what I surmise is relevant foliage. Perhaps if I look on another day my view will change and I'll see his typical artistry. In any case they weren't much help yesterday.

Finally I decided to do something similar to many warbler renderings: paint a warbler among relevant foliage. Mine is tightly cropped however rather than showing more of the foliage as in Audubon and others. I would prefer to avoid this tight cropping because it often looks too much like something just copied from a photo. But I also wanted to accentuate the bird, and it was done more from one of my recent photos than from my field sketches. The watercolor above is a small one, about 5x9 inches. on watercolor paper.

I've recently been rereading two books by artist Bruce Pearson, 'An Artist on Migration', and 'Birdscape.' I think it's in the latter that he says an artist doesn't try to portray what he sees. Instead he portrays 'what he wants you to see.'
The difference is that he wants to create the same sense of passion in the viewer that he has as he views, and paints, the bird.

There is a dichotomy in American wildlife art, and probably the wildlife art of many countries, between art and science. David J. Wagner in his wonderful book 'American Wildlife Art' uses Karl Rungius and Louis Agassiz Fuertes as well-known examples. Many people knowledgeable about birds prefer Fuertes to Audubon.

This makes sense if you value science over art in wildlife art, not that Fuertes didn't also make very artistic paintings. He did and I in no way want to criticize him. I much regret that I didn't avail myself of the opportunity to study his work firsthand when I was a student at Cornell. But Rungius was more aware of the art world and incorporated it in his own wildlife paintings.

In my own work I continually struggle, especially with warblers, to create paintings that will make viewers see what I want them to see. There is an element of science in this, but in my work art always plays a larger part.

This is a long route to saying that though I'm happy with this little painting I'm also disappointed in it. All my recent warbler works seem like studies. I, hopefully, am working my way to a more ambitious portrayal of what I want 'you' to see in the wood warblers.
Posted by Ken Januski at 12:59 PM