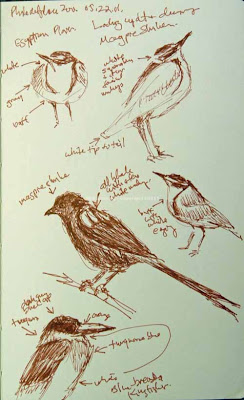 I've been looking forward, actually since last fall, to doing paintings of wood warblers once spring and summer got here. I had no expectation at all of skecthing African and other exotic birds.

But an unexpected visit to the McNeil Avian Center at the Philadelphia Zoo with visiting relatives this weekend brought surprise opportunities.

So some sketches of an Egyptian Plover, chasing around the much larger and higher Magpie Shrikes, as well as a Blue-breasted Kingfisher. 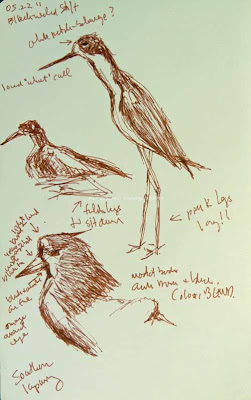 Also a Black-necked Stilt, a bird that is often within a 2-hour drive of here at Bombay Hook NWR, and a Southern Lapwing.

After many years of struggling to catch brief glimpses of birds in the field and then sketch them it's been getting easier and easier this year. First all the nearby wood warblers at Magee Marsh, then these really near birds at the zoo. I had less than 90 minutes to work on these so there was that pressure. But other than that it was quite a happy change. Most birds are seen for less than a second. These held still for a much longer time.

I've never thought to much about animals in captivity and what I think about that. Partially this is because I so rarely go to zoos. But I can say that this was a real treat as far as having subject matter that didn't disappear for hours at a time.

And of course there were all the other animals. I'll be going back to the zoo. And I know what probably struck me the most on the last visit, outside of the birds: an incredibly light on his feet rhinoceros. Surely it will appear in a field sketch sometime this coming summer.
Posted by Ken Januski at 12:58 PM

Hi Ken -- I'm not a big fan of zoos and the like, but one of my favorite places to see birds and other animals up close is the Monterey Bay Aquarium. They have a wonderful aviary that you walk through with a beach at eye level along with many shorebirds including stilts. It would be a great place to spend time drawing since the birds are little more than an arms length away.

I've heard a lot of good things about Monterey Bay Aquarium. If only I'd had the sense to visit when I lived in CA many years ago. One more excuse to revisit I guess.

Most of the birds in the McNeil Avian Center were up close, or could be if they chose to. One bird whose sketch I didn't include, Violaceous Turaco kept inching closer and closer as I drew him. Actually he was about as far away as the photo in the link shows. Maybe he has a habit of getting that close! I know at one point, when he was less than a foot away from my face, I began to get concerned. About that time he flew and I never finished the drawing, which is why I didn't show it.