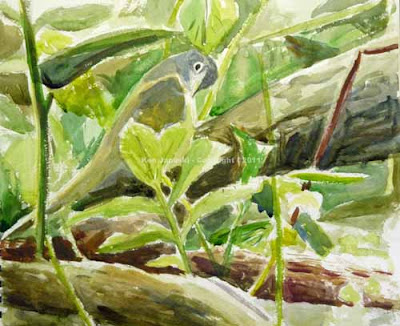 No the "I" is not me, and the "You" is not anyone who reads this. My reference is to this well hidden but eagerly sought Connecticut Warbler on the boardwalk at Magee Marsh last week. He is the "I" ignoring all birders.

I'm not the type of birder who goes to great effort to see a new species. I'll make some effort and I'm happy to see them but they're not a treasure hunt worth serious sacrifice. I think this may be a minority opinion. There are a lot of serious life bird searchers out there.

But when someone tells me that there is a rarely seen warbler right in front of me, and down on the ground not out of sight 100' up I'll try to find it, see it, maybe even sketch it. Well I have to say that an hour later when we finally got a good look at this bird we both were ready to quit birding for the rest of the afternoon. This was just far too mentally exhausting!

Why? Well I think this watercolor based on a photo I took shows why. This bird was buried in the ground foliage and forest detritus, much of which was taller than it was. And it wasn't in any hurry to move around and give potential viewers a clue as to its whereabouts. In fact there was plenty of time to just stop and do some preening.

I particularly liked this photo when I discovered that some of my shots had actually captured it because of the extreme nonchalance the Connecticut Warbler showed in the face of at least 50 people at any given time trying to get a look at it. Many were trying to add it to their life list, a rare opportunity right there before them.

I did a lot of sketches of warblers while I was there and showed most of them recently. I look forward to doing paintings or prints based on them. Photos will only be of secondary importance when I work on them.

But here there was only this one photo. After hogging valuable boardwalk space for most of an hour we moved on as soon as we'd gotten a good look and I'd shot a couple of quick photos. It would have been too rude to then sit there and try to sketch him.

But I had to laugh when I saw the photo. So my first work starring the warblers that we saw is based on a photo. This wasn't my intent. But it seemed like too good of an opportunity to pass up. I tried to give some sense of how buried he was in the foliage. I don't know these warblers and the colors in the photo are confusing. Was it blue, gray, brown, a combination? That's one reason I don't like to paint birds I don't know well. But this one I just couldn't resist, even with the confusion

This is a very busy, non-art week for me. I'd like to go back into this. But I suspect that I won't, at least this week.
Posted by Ken Januski at 5:48 PM