Waxing Philosophic about Birds and Geology 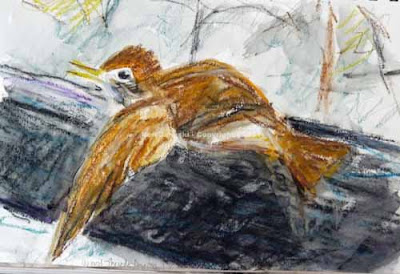 One downside of taking a vacation is that when you return home the rhythm of the natural world, if not other worlds as well, is off kilter. We left for Ohio in mid-spring. When we returned various obligations, tropical heat and rain kept me out of the field. When I finally returned to birding today something was wrong.

The spring migration was missing. Where were the migrants? I'm still in migrant bird mode, not breeding bird mode, searching trees and shrubs hopelessly for migrant warblers. All I could find were a few breeding birds.

One of them included the mystery bird at top. What is it? What in the world is it doing? I quickly realized that it was a Wood Thrush, drying itself on a log. It lay flat, wings hanging out and down the side of the log, the tail flattened against it as well. Its torso looked far too short and its head to0 peaked. But I think this can be attributed to the fact that it was wet(thus the punky hair) and it was lying flat. So what normally looks like a long, sleek bird looked small and round.

This reminded me though of one of the pleasures of birding with breeding birds. If you have the patience to just see what is happening there are a lot of surprises, particularly birds calmly going about their business. My guess is that the late hour of day(noon) and dearth of birders had put the birds less on guard. Carpenter's Woods had become theirs again.

In any case it reminded me of one of the things that I do enjoy about birding in the summer. You get to become more acquainted with your local breeding birds.

As far as the sketch here well it's a far cry from the last one of the Black-throated Green Warbler. That was based largely on some photos I took. I'm always bothered by that, like I'm cheating, though that's not really the case. In today's case I assumed that the thrush wouldn't stay that way long. I feared that every time I raised up my binoculars to take another look before committing a line to paper that the thrush might move. As I held my sketchbook in one hand as well that meant each time I raised my binoculars to my eyes I also raised my sketchbook. Much too much flapping movement not to spook birds.

But I did get a cartoonish sketch that at least captured the moment. This is another sketch, in pencil and Caran d'Ache Neocolor II crayon and wash, that is based on the field sketch. There was no reason to use the crayons other than to continue to experiment with them.

With such an odd pose, that doesn't look believable even when it's right in front of your eyes, there's a temptation to think it would have been good to have a camera and take a photo. But my experience is that it's better to get a quick, even if cartoonish, sketch based on direct reaction to what I saw than to get a photo which might be even harder to puzzle out. At least in drawing it live I have to puzzle out what I'm actually seeing. So I'm happy that I stuck with a field sketch for this.

There's a lot to be desired but I think it does capture the moment, at least for me.

So what about philosophy and geology? Well ever since I read the cover story in the new 'The Economist' I wanted to respond in some way.

Breeding bird behavior sort of led into the article. One of the pleasures of learning about breeding birds is that you feel that you're adding to your knowledge of the natural world, a world that is larger and often more profound than the day to day human world, certainly the human world that is evident in news headlines. Knowledge of the natural world gives an interesting perspective on quotidian concerns.

This is especially true when it comes to geology. It covers such a huge time span that most human activity seems insignificant in the face of it. We tend to forget ice ages, extinctions, continent dispersal and realignment. No one, well almost no one, is worried about the North American continent splitting up and how that might effect government entitlements. We think on a much smaller time scale. Geologic scale and time is nearly incomprehensible to humans.

But there is something comforting about it. As with nature in general there is the realization, at least for me, that the world is much larger than the one I spend my daily life in. Man himself has been around for a very, very short time.

And that's what's so interesting, and scary I think, about this article on a new geological age, the Anthropocene. Since I've never studied geology formally and don't hang around college science departments I'm not familiar with just how seriously people take the idea of a new geologic age. I'd never heard of it before reading this article. As the article says:


Humans have become a force of nature reshaping the planet on a geological scale—but at a far-faster-than-geological speed.


So some theorize that the new geologic age is one in which the predominant factor is man himself. That is scary and it does, at least to me, question the nature of 'nature.' Man has long had a history of subduing nature. And at this point in history it's hard to objectively separate out the good from the bad and come up with an honest assessment. I dislike much of the destruction of nature that I see. But I also recognize that there has been progress. But it's never been on such a scale.

The article mentions a tar sand mine that physically moves twice the amount of sediment moved by all the world's rivers in a year. Do I really want someone I don't know, who is most probably more interested in profits for himself than anything else, to be messing with the earth at such a level? Not exactly.

The authors are much more sanguine about this and seem to think there's no way around it anyway, given the increase in human population. These are all very large questions. I don't have the answer. But I think the article is worth reading and thinking about.

The nature of nature seems to be changing and no one's in charge.
Posted by Ken Januski at 4:22 PM