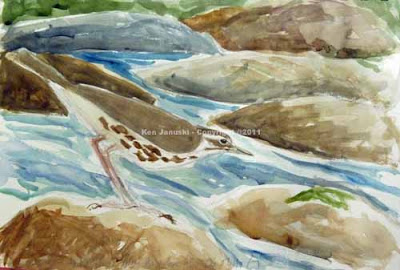 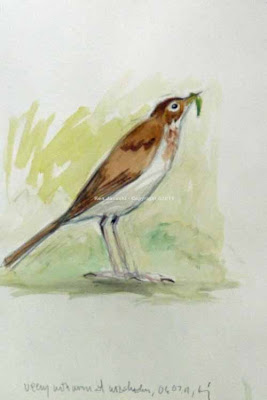 I realize that when I put 'long legs' in the title of a post that I'll probably draw some readers who are expecting something other than birds. But I'm doing so because the first thing I thought when seeing the two birds pictured above this morning was: they have long, pink legs. 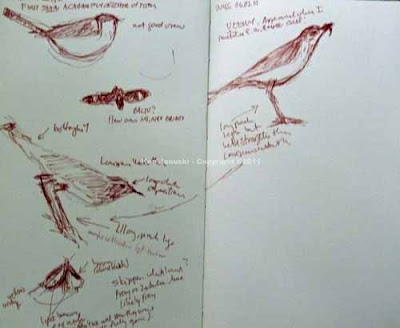 Above are the actual field sketches from this morning at the Wissahickon. Included are the two birds with long, pink legs, a Louisiana Waterthrush and a Veery, as well as an Acadian Flycatcher, a bird in flight that might be a Baltimore Oriole and a skipper butterfly, most likely a Fiery or Zabulon Skipper.

The more I bird, and sketch, the more I realize that the legs, where they're placed on the torso, and the way that they're held have a lot to do with identifying birds. Often birds take typical postures. And often they have noticeable legs. Not all that many have long, pink legs.

But here they both do. And yet how different they are. The waterthrush always has bent legs, rump almost straight up in the air, head pointed down. In contrast the Veery, and some other thrushes, seems to use his legs to stand taller and straighter. The pose I drew almost looks wrong, like a Veery that's been stretched out. But that's exactly what he was doing, possibly alert for danger.

In any case after I'd done the second field sketch of the Veery I knew I'd like to do a post, and perhaps paintings, that talked about legs on birds. So the watercolors at top are both based mainly on the field sketches I did today. I also looked at some of my photos but ended up sticking with the sketches because they were truer to what I actually saw. They're done on paper from Stillman & Birn, in their Gamma series sketchbook.

I succumbed to some advertising on what good sketchbooks they made and bought one. This one really isn't meant for washes but it will hold up to light ones. For that purpose I'm happy with the sketchbooks. The paper is a bit higher quality than what I normally use for sketches and that was the reason I decided to try one of their sketchbooks. I prefer to sketch on good paper if I can afford it. So far I'm happy with this sketchbook but still need to test it a bit more. 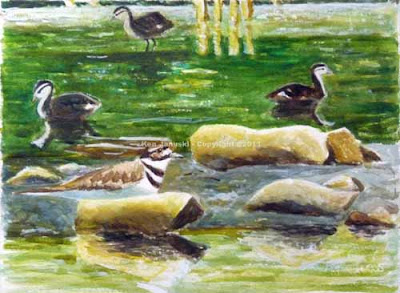 I went back into my Kildeer and Wood Ducklings watercolor yesterday. It was the same day I received a new tube of white gouache. Well I got carried away with it. I don't like to use gouache because it's so easy to turn a transparent watercolor into a more opaque watercolor something more like acrylic or oil. But that's what happened yesterday. There's nothing wrong with gouache and many a justly famous artist has used it in their watercolors. Sometimes it's the only way to save a painting. But I still long to be a master of transparent watercolor! The way that transparent watercolor captures the sense of light, when masterfully used, just can't be beat.
Posted by Ken Januski at 3:19 PM

Thanks for trying out one of our new Stillman & Birn Gamma sketchbooks. I'm glad you had an initial positive reaction and look forward to reading more in future blogposts.

Please feel free to contact us directly at any time with comments or questions at info@stillmanandbirn.com

I did want to at least mention the Stillman & Birn sketchbook in my post but since I hadn't yet used it for its main purpose for me, pencil sketching in the field, I also wanted to indicate that. So it ended up being an awkward compliment I guess.

Give me time though. I hope to do some real sketching with it soon.

One thing I found is that it was difficult to decide which of the five sketchbooks to try first. In the long run my guess is that this is good. Plenty of choice if you're clear on what you're looking for.