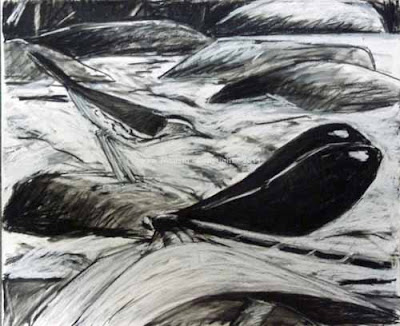 I guess I'm all colored out. First the dull brown Common Nighthawk, now this black and white charcoal and pastel of a Louisiana Waterthrush and Ebony Jewelwing seen along the Wissahickon in Philadelphia recently.

Actually the motivation was more that I've been thinking about a new linocut and exploring various compositions. Though I have done multicolor reduction linocuts it's a whole lot easier to stick to just one color. Since I've seen both Louisiana Waterthrushes and Ebony Jewelwing damselflies at the same spot on the Wissahickon recently a composition featuring both of them has been knocking around in the back of my mind.

Rather than go directly to linoleum block with this I thought I'd enjoy trying it first in charcoal. This used to be my primary medium, both as an abstract artist and for awhile as a wildlife artist. So it seemed like it might be a good idea to return to it for awhile.

The only problem is that I've finally used up all of my erasers that were able to erase right through compressed charcoal back down to the white of the paper. And I haven't been able to find them anywhere. So here in order to get back some white I added white pastel. As you may notice it has a bluish cast that is different from the warm ivory of the paper. But that's the way it is. Artists are good at adapting.

Once you decide that you're going to use birds as a subject in art you have another important decision. What do you do with the background? This is something I've struggled with since I began. The main options seem to be: 1. standalone portrait, with no real background; 2. portrait with impressionistic background, just enough to indicate some sort of believable environment; 3. painterly style, where the brushwork unites the bird and background, but there is no recognizable natural background; 4. photorealist background where everything, bird and environment is done in detail like a photo; 5. naturalistic background, where the background is recongnizable but it doesn't at all look like a photo as in much 19th century wildlife art.

There are all sorts of variations on this. A great personal discovery for me was bird and flower painting. Not exactly realistic but certainly naturalistic this style also has the very appealing trait of combining bird and environment. I'm not claiming at all that this new charcoal is in that tradition. But I think it does share a kinship with it in placing importance on bird and environment.

In fact that's why I've often added butterflies, dragonflies and damselflies, as well as turtles to my bird paintings. They are often right there in the same environment. Including them is both true to nature and allows for a lot of compositional experimentation. I don't have the time to check right now but my recollection of Audubon is that this is also something that he often did.