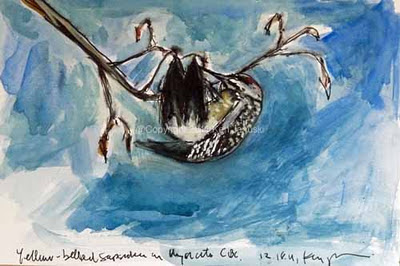 Yesterday we took part in a Christmas Bird Count, one of very many that began last week and will continue through January 5, 2012.

As the link to the national Audubon site above says it is now over 100 years old and has tens of thousands of participants. I imagine there are various reasons for taking part.

For us, as with the Philadelphia Mid-winter Bird Census, I always realize that much of it is that we just enjoy being outside in cold weather. I suppose if we didn't live in a large city we'd go skiing or snowboarding or something like that. It is more than that of course. It is about birding, the thrill of the hunt, as well as conservation. But in the end I always feel that I've just enjoyed being able to spend most of a winter day outside. Of course this would be far less thrilling without warm clothes!

I didn't expect to sketch or take photos yesterday. I knew it would be too cold to spend much time sketching. And I didn't really expect any rarities. But toward the end of the day this female Yellow-bellied Sapsucker curled itself up like a grub on the slender branch shown above. I assume it was eating but what? I don't think there were any insects on these tiny stems. I really didn't look closely enough to see if there were any tiny berries there. My recollections is that there were either catkins or small leaf buds. After I posted this I mentioned it to my wife. She was paying more attention than I: the bird was eating very small berries.

In any case it was an unusual pose for a sapsucker. It was made all the harder to draw because she was facing away from us. Her tail was in focus and her head was opposite the tail, horribly foreshortened.

But it was a pose too interesting to pass up. So I pulled out my sketchpad from my backpack and did a quick sketch before she flew a second or two later. This is an ink, watercolor and gouache sketched based on that quick field sketch. I missed so much information in the original sketch so reconstructing a correct view of the bird was difficult. So I looked at other sapsucker photos I have, at some downy woodpecker photos in a vaguely similar position that I have and guidebooks. This is pretty close to the original sketch.

There are some details I question in it. Are they correct? Perhaps not. But I'll look more closely next time I see an upside down woodpecker. It does get a sense of the pose and commemorates a moment in a CBC. Just one more of the enjoyable aspects of a Christmas Bird Count. This one by the way was for Wyncote Audubon, our local Audubon chapter.
Posted by Ken Januski at 11:25 AM