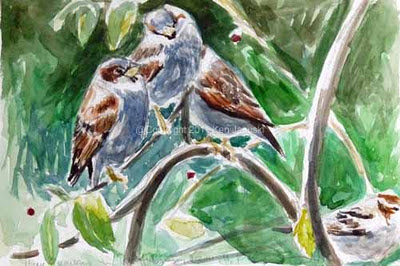 Until recently I've had a lot of the local House Sparrows visiting my window feeder,which sits just a few feet away from me as I write this. I've shown a few of the field sketches. Since they're only there for the food though no one is sitting still. They all land on top of each other fighting for a place at the table. In a split second they're gone.

So I've been able to do some sketches of them that I think have a sense of dynamism. But they don't have much detail. I've haven't been able to get a good look at the bill, at the facial coloring, especially on the male, or at the feathers. So recently I took a few photos of them sitting on one of our winterberries on the backyard. There they are a bit more likely to sit but they're not as close. So I need to either draw while using my binoculars or a scope, or take photos. I opted for some photos.

As with many parts of nature the more you look the more beautiful you find it. The same is true of House Sparrows. I don't like them because they've driven off almost all of our other feeder birds. They constitute 90% of our feeder birds each winter any more. But they do have their own beauty and personality.

I've been using my various Stillman & Birn sketchbooks mainly to draw in ink recently. That was the case with the Canada Geese in the last post. The sketchbooks have worked well for that and for all of my work.

In this case though I wanted to use a fine pencil as a guide for a watercolor, one in which the orginal pencil lines probably wouldn't be evident at the end. This work is done on a 6x8 inch Beta series sketchbook. As I flip through the sketchbook I notice that the Lincoln's Sparrow of a week or so ago was also done in the same method in the Beta.

It has worked well for this method as well as for the runny ink and watercolor method that I often used. I used to use another brand of sketchbook for this type of work. It also worked well enough but I was always hesitant to sell any of the works that I liked. The paper didn't seem of high enough quality. I compensated by lowering the price for those works.

But with a stronger paper like this I'm not hesitant. The paper works fine for more finished work. But the purpose of these is still as small, experimental sketches. It's an easy and quick way to try something out and see if it might deserve fuller working in paint or printing ink. I'm still not sure where this one might lead but I am quite tempted to do a more permanent homage to these bullies of the bird feeder.
Posted by Ken Januski at 10:52 AM