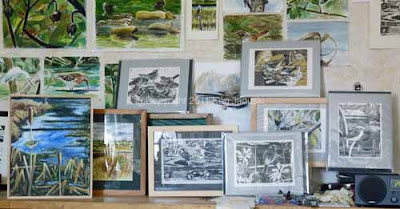 One thing I never expected when I joined the local Manayunk Roxborough Art Center early this fall was the constant opportunity to exhibit. This is tempered somewhat by a smallish audience but you never know when that might change.

So this Sunday's Holiday Show, with festivities from noon to 3, is one more opportunity to show. I've just finished cutting mats for six prints, building a frame for one paintng, and experimenting with store bought frames for two of the prints.

I've always been an artist who's more interested in the art than in the packaging but that's easier to do when your art stays in the studio. If it's being exhibited somewhere then you need to consider things like mats, frames and of course their cost. I'm surprised that I don't mind this work and the cost hasn't been as bad as I feared.

I guess part of that is that the work just looks better in a mat and/or frame. If it doesn't end up on someone else's wall it might just end up on mine, somewhere outside of the studio. The photo above shows the newly matted and framed work in the studio along with some other work on the walls.

I've only had time to try watercolor on one of the tiny osprey prints. It is below. 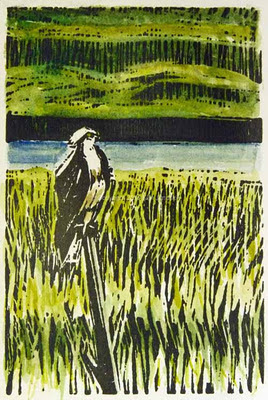 I'll probably try another version or two on the two remaining proofs then watercolor the remaining prints in similar colors. This is not my most ambitious work but I still find it somewhat striking.
Posted by Ken Januski at 11:15 AM

Congratulations on having so many showing opportunities! I find the more exhibits I do, the less I worry about every little thing and I am able to see it from the perspective of a business rather than having my fragile artist ego so caught up in it, if that makes sense.

I really like the color on the tiny osprey print! It is a striking piece.

I also like the frame you chose for your Ruby-crowned Kinglet in Cattails painting. That one kind of jumped out at me in the photo. It really is funny how a mat and frame can add so much to a piece. I've had many a painting that I felt so-so about only to fall in love with it when I got it framed. But the opposite can happen, too. Because we're on a bit of a budget, my husband just got a cheap frame for my French door painting so he could hang it in his office and I really don't like it now!

I'm all too familiar with the latter scenario. What can be worse is to build your own frame and put a lot of work into it and then find that it actually makes the work look worse!! I've done that!

I guess over time though you get a better idea of what will work and what won't.

I know completely what you mean about the perspective of a business rather than that of a fragile artist. I think that's sort of what I was getting at though I didn't make it explicit. There's something enjoyable about doing all the little business type things that are part of art, at least that goes out of the studio into the world.

A good break from the ethereal realm of art!