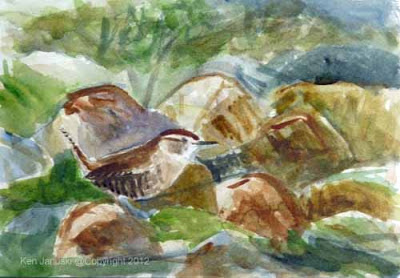 Yesterday we took part in the Christmas Bird Count with Wyncote Audubon. I think we began cold weather birding at least 10 years ago. I've always loved the opportunity to be outside in cold weather, a relic of my childhood I guess, when winter was one grand though cold adventure. I'm not sure how many times I got home from my long walk back from grade school wondering if I'd finally gotten the treatened frostbite on my ears. I didn't care. I liked the long walk home in the cold and snow.

Oddly I  paid little attention to nature at this time. I didn't know birds, mammals, trees. I just liked being outside. I think that is still a large part of my enjoyment of birding and is part of what I try to portray  in my artwork.

In any case the longer we've done this, especially in the same geographical area, the more knowledgeable we've become about what birds we might see. We also make a more determined effort to find them. One such bird is the Winter Wren, also known as Feathered Mouse. You can often hear them and often catch glimpses of them. But rarely do you  get a long long at them, especially long enough to sketch them. Experience paid off yesterday. We saw at least two and possibly four.

Both pairs were in the same location, Carpenter's Woods,  separated by 100-200 yards. Though they're very small they move quickly. So it's most likely they were the same birds. 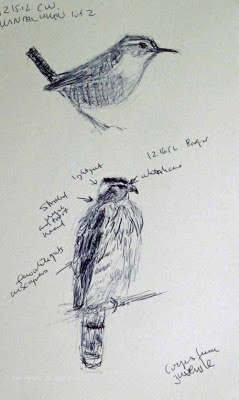 Above is a quick field sketch of one of the birds. At top is a small 5x7 inch studio watercolor based on the field sketch. One of the pleasures of yesterday's views was that we stood stock still at one point and one wren didn't notice us. So he picked around in the leaf litter, often disappearing in it, just six feet away. It may have been the best look we've ever had. Even though we know that they  disappear in leaf litter it's always shocking to see it happen in front of you. Thus the Feathered Mouse reference. They really  do behave like small mice.

We ran into an acquaintance at Carpenter's Woods who told us where an Eastern Screech Owl roosted and when if flew. So we ended the day  waiting outside that tree for an hour. Owls are always a treat. But I think  the good views of two winter wrens was the best part of the day. We hoped to find the Green Heron I'd seen at the Manayunk Canal a 10-15 days ago but no such luck. We did see two Great Blue Herons, a couple of Pied-billed Grebes, one or two Brown Creepers, a Golden-crowned Kinglet and most of the birds you'd expect to see at this time of  year in the habitat that we birded. Missing birds that we'd hoped to see were Pileated Woodpecker and Yellow-bellied Sapsucker. And not a single bird feeding on Poison Ivy, one of the most prevalent scenes of the last few weeks.

One last note on the watercolor. The Winter Wren is usually a dark bird in a dark environment. That makes for a difficult painting. Should the artist make the bird as hard to see as it is in real life? I've decided not to do so in this painting. The surrounding environment in particular is lighter and brighter than it really was. But the bird I think stands out, as I'd like it to.

Soon after I posted this I walked downstairs to find a juvenile Cooper's Hawk sitting right outside the kitchen window. Unlike the Winter Wren he held his pose for 30 minutes. So I couldn't resist getting the sketchbook back out.