The Process of Art 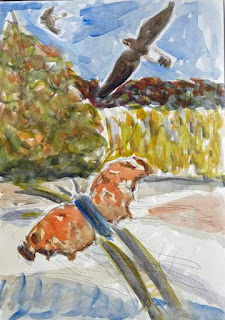 As I've continued reading Wildlife in Printmaking by Carry Akroyd from Langford Press two things have struck me: one, how many of the artists represented use their sketchbook as the source of their art, and two, how many consider the process of printmaking as important as the subject.

Anyone who's not an artist might wonder what I mean by process. What I and most of the artists mean I think is that the surprises that come about as you develop the print are just as important as any plans that you might have had initially as to how the print would develop. When I  was interviewed for Printsy, the printmakers of Etsy, a couple of years ago I said that one of the things I  found that I most liked about printmaking was the element of surprise. That still holds true and I was surprised to see how many printmakers  have the same feeling. It is somewhat like an improvisatory art.

I could theorize forever about why this might be but I leave that to others. I don't know. But I  do know that I  very much like it. 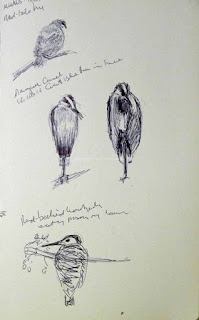 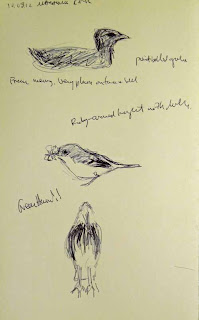 At top is a watercolor study composed from three field sketches done at Higbee Beach at Cape May last October. It epitomizes Cape May in fall to me with raptors floating overhead and butterfles and dragonflies keeping to the lower level. This is just a compositonal study, most likely for a color reduction linocut.

Above are two field sketches. At top the Red-tailed Hawk is from  Morris Arboretum yesterday.  The Great Blue Heron and the upside down Red-bellied Woodpecker eating poison ivy berries is from the Manayunk Canal today. The second sketch is also from the canal and shows a Pied-billed Grebe from memory, a Ruby-crowned Kinglet eating a moth, and a totally unexpected Green Heron off on the far side of the canal after I moved too close to try to get a better view for a sketch. 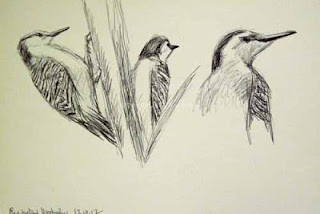 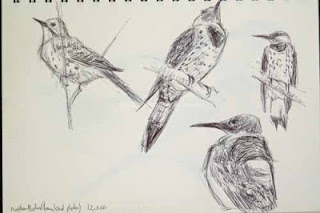 Recently we've seen many Red-bellied Woodpeckers and Northern Flickers hanging upside down eating poison ivy berries. We also saw a Yellow-bellied Sapsucker doing the same thing last winter. This is a difficult pose to get right. So I've done the sketches above from photos I've taken of Red-bellies and Flickers. My hope is that such practice will help me to do more accurate drawings of these woodpeckers when I see them in the field.

As with the watercolor at the top I hope to develop a painting or print from the sketches. That's one of the wonderful things about many of the prints in Wildlife in Printmaking. They don't just capture the bird. They attempt to capture the entire experience. And they also improvise along the way,  based on what their medium tells them. The result is joyous art.
Posted by Ken Januski at 2:44 PM

I love your red-bellied woodpecker sketches. It seems to me that the turn of the head is just right. Nice body shape and capturing of behavior. I love all the woodpeckers and of course we are seeing more red-bellied's up here.

Thanks Ellen. This is the time to see woodpeckers. The Red-bellied is very common here, perhaps moreso than the Downy though it probably just seems that way. But I've had the hardest time getting them down, I think because the face is so simple.