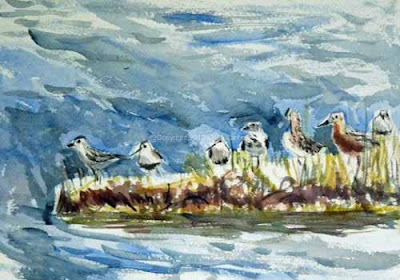 Many years ago when I first started taking art courses in the San Francisco area, even though I'd made art on my own since I was a child, there was one course that was a revelation to me: Oriental Brush Painting, as I think it was called. What was so unusual and revelatory was the importance of the brush mark. Each mark was important, not just the overall drawing/painting/impression.

This was made even more noticeable in the actual practice of painting.  The rice paper we painted on had a consistency similar to toilet paper. The black ink on the brush seemed to leap off the brush, even before it touched the paper, and form an indecipherable blob rather than the graceful mark I sought. What this taught me I think is that it's possible to make art that contains the most graceful and expressive marks, which are themselves a major component of the art.

This course was only one semester long and I never began to master it. Still I've never lost my appreciation for it. So when I took  up watercolor, after only the briefest foray into it as a student at Berkeley, I was quickly  reminded of the importance of marks. Watercolor is not as absorbent as the rice paper I used to use but still an inelegant mark can show up as just that: inelegant. It's much harder to cover over such inelegance as you can in oil or acrylic.

I mentioned in my last post how the realism of the sketches I've done recently  might soon be replaced by more abstract work, especially since I started reading Wildlife in Printmaking by Carry Akroyd. That is exactly what has happened in the 9x12 watercolor above. It revisits a familiar theme: shorebirds at high tide on Nummy Island. This one includes a Red Knot, as well as Short-billed Dowitcher, Black-bellied Plover and Dunlin.

In it I've tried to keep more of the white of the paper, to accentuate a variety of marks, and to avoid too much detail in the birds, or anything else for that matter. I've always liked more abstract art and the Akroyd book reminds me of how much I like that sort of art. When I used to be an abstract artist I'd always use a musical analogy to try  to explain it to befuddled onlookers. Most people don't demand that music tell a story or paint a picture. They react to the non-verbal music itself, to the melody, rhythm, etc.

These are also important elements in art and are often noticed most in decorative arts though not completely. Architecture also makes much  use of pattern and rhythm. When you use something like that in a  painting you  have to decide whether to sublimate accuracy for rhythm and pattern. I've made a first attempt at that here.

Over the last few years I've occasionally  made a painting that drifted in this direction then scuttled back to the safety of realism, which of course there's nothing wrong with. But my artistic background has always been much more appreciative of marks, of pattern, of design. So once again  I'm taking a chance on that direction. This time I hope I can stay with it a bit longer.

My linocuts I think do tend much more in this direction. But I've wanted to do it in painting  for quite awhile and keep getting scared off. Hopefully this time will be different.