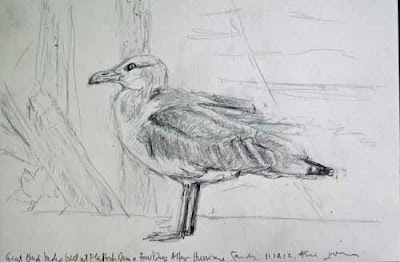 'Incisive' is often used to describe a person's mental abilities I think. It indicates sharpness, an ability to see the important things through all the unimportant when viewing a problem. I'm not claiming that for me or my drawings, at least not for me in particular.

Actually it's almost the opposite. Almost all drawings are incisive. For me one of the most useful aspects of drawing is its ability to be incisive, to seek out the structure underneath the fluff and glitz. Not all drawing by  every person does this. But most do. It seems to be almost a primordial part of Western drawing if not all drawing.

I've  written about this before but it always strikes me afresh. There's something almost analytical and surgical about sketching. You try to see underneath the murk to the real thing.

I don't mean this in a mystical way, bur instead in a scientific way. I particularly mention  it with these drawings because they're all done from photos I've taken. What I always find with photos is that I need to see beneath the surface of masses color or tone and figure out how the underlying object is put together. With birds it's a question of what those feasthers are on the back and how do they relate to the wing feathers. Where do the legs go into the torso and how is the bird balanced on them.

For me, especially when working from photos like this, I feel like the pen or pencil I hold in my hand is like a scalpel trying to figure out the three-dimensional structure of what photography has turned into a flat two-dimentions. I'll in turn return it to the two dimenions of the paper on which I draw. But as I do so I  want it to be informed by my understanding of its three dimensions.

The drawing above is a pencil drawing on Stillman and Birn Gamma series sketchbook, size 7x10 inches. I haven't used these sketchbooks in awhile but they've always worked well for pencil sketches like this, among other  things. 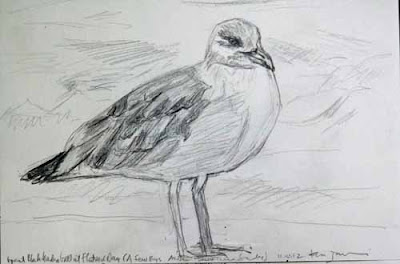 Above is another sketch of the same Great Black-backed Gull seen near Flat Rock Dam on the Schuylkill River in Philadelphia a few days after Hurricane Sandy. I was there looking for any birds displaced to our area by the hurricane.Though I didn't really  find any I always enjoy seeing some of our more common birds, including Great Black-backed Gulls.

When I do drawings such as this I never intend them as finished works. Instead I do them with the intention of learning something. I hope that when I'm done I'll have a better idea of the structure of  the bird drawn. That knowledge in turn will be put to use in some drawing, painting or print in the future.

These two drawings were started while I gallery  sat for 3 hours this morning at the 'Wild at Art' show I'm in at the Manayunk Roxborough Art Center. And there were no visitors! Come on local readers, assuming there are some, I/we need some visitors and some sales! Still it was time well used. But it would be nice to see more visitors to the gallery  both for the current show and all shows. It's open 10 a.m. - 4 p.m. on Saturdays and Sundays. 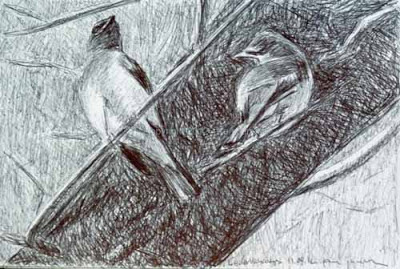 Yesterday I tried another drawing from a photo, this one a smaller ballpoint pen drawing of two Cedar Waxwings on Stillman and Birn Beta Series paper. The birds themselves are somewhat successful though both show I think that I couldn't fully understand their structure from looking at the photo I used as my source. Worse I really was not successful rendering the bark of the tree in which they perched. Still I learned something in doing so.

I very rarely do a finished painting or print directly  from a photo I've taken and never from someone else's photo. But these sort of sketches seem to exorcise the photos in some way so that I later feel more comfortable using the drawings as the start of a painting or print. I know it seems odd. But it's true nonetheless. I think one reason is that the sketches make me feel a little clearer about the structure of whatever I'm painting. They're also like a warmup  exercise, like playing scales. All part of the process of making a work of art.
Posted by Ken Januski at 3:34 PM