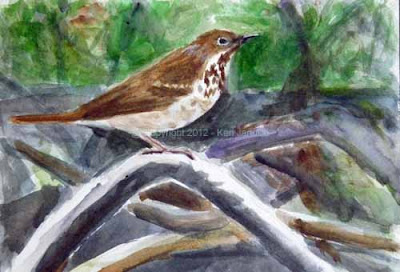 After voting yesterday Jerene and I took a walk along the Wissahickon. It's always a good way to get back to the real world and away from the hyped-up world of politics. Toward the end of our walk my second Hermit Thrush of the fall appeared on a pile of dead limbs along Gorgas Lane trail. Unlike most thrushes the Hermit will often sit still for a long time.

So that allowed me time to do a field sketch. This is a small 5x7 inch watercolor based on it.

When we got home we turned on the television and sat more or less glued to it until after 11. By that time the election had been called for Obama, at least by a few stations.

Since I've talked for more about politics than I normally  do recently I'm only going to say that we were both very pleased to see that a campaign that involved voter suppression, an extremely harmful Supreme Court decison, vast amounts of money that would have been better spent elsewhere and lies piled upon lies all based on the assumption that the voter is both stupid and easily manipulated failed. It FAILED.

I don't care what your political party. Eveyone should be happy to see the end of such a campaign and hope that we never see such a one again. This Hermit Thrush was a bit of fresh air amidst all of that.

Now there is very serious work to do in Washington. Let's hope that it finally gets done!
Posted by Ken Januski at 9:51 AM

We were up late too, but out in the fresh air first thing this morning. It was a great outcome, especially in NH. We're pleased. A little storm is brewing now, maybe some snow tonight. The birds were laying low in the woods. Today is completely different from yesterday, weatherwise and politically. I think the animals are happy too!

I'm not sure how I missed responding to your comment - perhaps from being up too late the night before.

I've been through some very disappointing day-after-election in my lifetime, including one where I had to take a long walk to try to shake it off and found our first ever local osprey.

What a pleasant surprise it's been to wake up the day after the election and be pleased with the results instead of scared to death!

It also gives me some faith in the electorate. Still when I see people who think differently it is shocking to see how intelligent people, not that they're all intelligent, can view the world and politics so completely differently. It's almost like going out for a walk and finding birds with 4 legs and squirrels with wings! As much as I do try to see all sides on an issue things like birtherism make less sense than Blue Squirrels with Wings.