Birds That Shouldn't Be Here 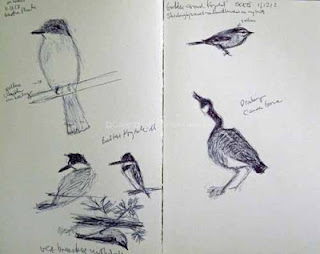 Well at least according to ebird, the wonderful bird reporting site at the Cornell Laboratory of Ornithology. I went to enter the birds I saw today including one Eastern Phoebe and two Red-breasted Nuthatches and ebird wanted confirming details because the birds are 'rare.'

I really can't complain about this. There needs to be some mechanism to screen out highly unlikely birds. But occasionally the screening process just doesn't match the facts on the ground very well. Normally I would call a Red-breasted Nuthatch rare in our area. But not this year. This is the fourth time we've seen them and we haven't really been birding all that much.

Same thing with the Easten Phoebe. It does seem a bit late for them but I'm pretty sure others  have seen them elsewhere in Philadelphia over the last week. Yesterday ebird questioned the 10 Chipping Sparrows we saw at Houston Meadonw. They were there and probably  in even greater numbers.

I didn't have  my camera with me yesterday but I did today. So  why didn't I take photos in case someone questioned what I saw? Because it's no fun and the birds weren't that rare. I don't enjoy taking photos but I do enjoy making sketches. If the birds had seemed rare to me I would have tried to get some photos. But doing so always takes away from sketching time so I never do it unless I think the  bird is 'rare' by my  standards.

I didn't intend to post these. But since ebird may ask for some proof here it is. Above you can see a young Eastern Phoebe at top  left, followed by two views of a male Belted Kingfisher and a Red-breasted Nuthatch hanging upside down with his head thrown back at bottom. On right is a poorly sketched Golden-crowned Kinglet that was just one jump away from landing on my hat, which seemed to be his target until he veered away. Finally a Canada Goose drinking some water he'd gotten from the pond at Schuylkill Center for Environmental Education. All of these sketches are from  today, on what may be our last warm day of 2012. 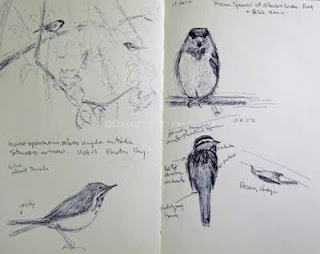 The sketches above are from the last week. On the left a couple of House Sparrows in the Silver Maple outside my studio and beneath them the first Hermit Thrush of the fall. On the right pages a House Sparrow from my studio window feeder, a White-throated Sparrow where I tried to concentrate on the streaking on nape and finally our first Brown Creeper of the year, hanging upside down like the Red-breasted Nuthatch. I have a long way to go in perfecting upside-down poses but it's always fun to try. These field sketches from life are a far cry from the sketches from photos I last showed. They're both useful but believe me these sketches in the field are a lot more fun!
Posted by Ken Januski at 4:56 PM