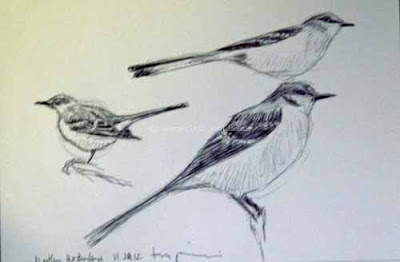 Ninety minutes of 30 degree birding at Morris Arboretum on Sunday reminded me that much of my field sketching is going to be on hold for the next 4-5 months. I could barely get my fingers to move enough to jot down what birds we saw, let alone sketch them.

During the winter my sketches will be done very quickly. Often I've tried to do field sketches of Northern Mockingbirds in winter. Generally what strikes me is a very long torso and tail, or a very dark eye, or a very long  bill and I'll try to capture one of those in a sketch. But then I'll come home, look at some photos and wonder where I got those ideas. So this fall when I took a photo that showed how long the torso of a Mockingbird can be I was quite happy. I've sketched that at top right above. I've also added the dark eye in most of the above sketches. The bill isn't really that long but it may be that a dark line in fron of the eye merges with the bill to make it look longer. If you look at the leftmost sketch though you  can see how I can get confused. Here the Mocker looks more like a rounded grapefruit than a very elongated bird.

I'm never happy with any attempts to do finished drawings from photos. They also seem lacking. But for understanding the structure of a bird, particularly if they show the whole bird and in good light, the sketching can be informative. 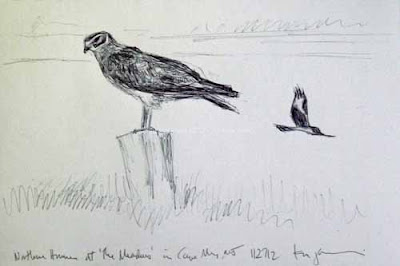 Northern Harries are quite different than Northern Mockingbirds in that I only see them on vacation. They're not a normal part of my local landscape like mockingbirds. They're magnificent birds to see but I almost never try to draw them as they drop down, lift back up, glide along then dip again, in constant movement. This year however I took my first photos at Cape May and also did a few brief sketches. The sketch above combines two photos of the same bird into one sketch. I've always admired other artist's drawings of harriers. It's nice to finally have my own. 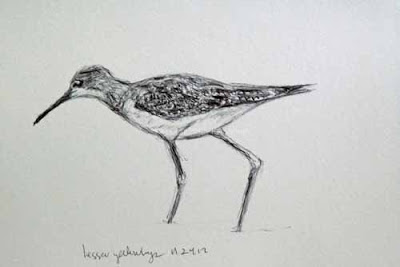 Yellowlegs are also a vacation bird primarily though they're occasionally at Morris Arboretum. They're more regularly at Tinicum but I just don't have the time to drive down there that often. So this was another opportunity to try to learn their structure, and complex patterning, a bit better. 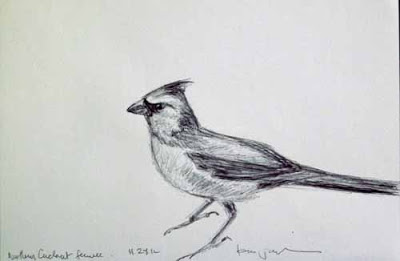 Finally we have the ubiquitous Northern Cardinal. Ubiquitous but impossible to draw from life. I'm not sure why this is unless it's the fact that the backyard ones are easily spooked. And then there is the black on the face of the male that I never seem to get right. Like the mockingbird they seem sleek one day and pot-bellied and heavy the next. I liked the way this photo gave a good sense of their structure so that was the impetus to do this sketch. They should be regulars in the backyard this year so maybe I'll finally do some decent field sketches.

That really is the purpose of these ballpoint pen sketches from photos I've taken: to understand the structure of certain birds so that I can do a better job when I do field sketches of them.

I recently received the wonderful book 'Wildlife in Printmaking' by Carry Ackroyd from Langford Press, publishers of the best wildlife art books in the world at least by my standards. As I've flipped through it I realize that the art I love is not limited by realism. It often takes great liberties with it. But it is founded in observation and knowledge of both the bird/animal and its surroundings. So I don't at all want to be trapped by the realism of these sketches, something quite easy to do I think. I hope that the knowledge I've gained will soon show itself in some much more abstract work, most likely in lino.
Posted by Ken Januski at 4:47 PM