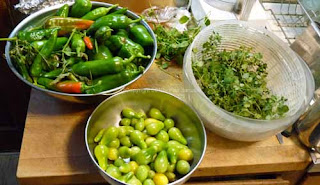 About 20 years ago when I was a much more avid gardener I mentioned to a co-worker at the newspaper at which I worked that I just harvested something from the garden. One of the top level newspapers editors, with a good ear for cant, cackled back "HARVEST??!!". I never asked but my guess is that he was from a farm state where harvest meant something big, almost industrial.
But I didn't back down. It was indeed a harvest, in the true sense of reaping the benefits of something that I and my wife had spent a long time nurturing. As he was one of the most likeable and humorous people there he didn't argue further. I think he understood what I meant.
Now 20 years later it is still pretty much the same. We'll probably get our first hard frost tonight along with a bit of snow. I've kept a raised bed of hot peppers protected under tarps for the last few weeks, hoping that they'd finally ripen from green to red before I dried them in our dehydrator. It wasn't to be. 90% of the Anaheim style peppers will have to be dried green. The smaller, and hotter, serranos will be frozen and they're just as tasty green as red. The few other milder peppers will probably be cooked as is or frozen for later use in a soup.
Along with them is a bowl of Yellow Pear tomatoes. They are always prolific and pretty cold hardy. But I don't think they'll last the night so it was time to pick them. They'll slowly ripen to a beautiful lemon yellow and add to various meals.
Finally my wife has been busy picking and drying herbs from our herb bed. Pictured here is some Greek Oregano a descendant of what we first planted 20 years ago. Sage, savory and mints have also been harvested. They'll be used this winter and probably beyond.
As I've been able to devote more time to art and the business of art I've spent much less time writing about our garden and nature in general in this blog. But I haven't forgotten it. And it's nice to return to it occasionally.
Posted by Ken Januski at 5:03 PM

Nice harvest Ken! Your growing season is just a bit longer than ours. Still, I didn't know the yellow pears were so cold hearty. Might have to try them under cover next year.

Yes one of the great things about Philadelphia is a surprisingly long growing season. I think because it's near the coast it actually is in a hardiness zone that is quite a bit further south than you would guess.

Generally by Thanksgiving though we have at least one hard frost that kills most everything off. I think we actually survived last night but will probably not tonight.

I don't think I ever read that Yellow Pears were particularly cold hardy. But they just seem to be the last tomatoes standing each year!