Birds That Shouldn't Be Here, More or Less 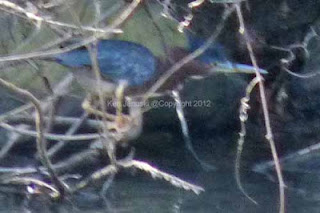 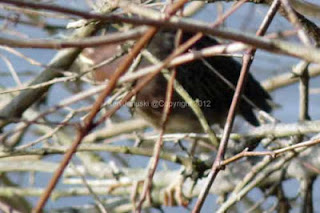 A few weeks ago I saw my first winter bird that shouldn't be here when I spotted a Green Heron along the Manayunk Canal in Philadelphia. I really don't like to be burdened with a camera and didn't have one that day. Though he was very close to me he flew before I could sketch him to the other side of the canal where he was much harder to see and sketch.

Since then I've looked for him numerous times, including for the Christmas Bird Count. But given all the herons I've seen there I suspected that he might still be around. Sure enough I ran into him again today, again on my side of  the canal, less than six feet away. This time I had deliberately brought my camera in case I ran into him or any other rarities. I really felt bad about not having photographic documentation of the Magnolia Warbler we saw  later in December so I'm trying to carry it right now.

Not that it did much good!! My Lumix FZ28(I think) is a good little camera, lightweight but with an 18x zoom, so it's a perfect compromise for someone who doesn't want to carry a camera. But it has a hard time deciding what to focus on at times. So if there are a lot of obstructions, e.g. twigs, between me and my subject it will often do a great job on the twigs and leave the bird out of focus. That was the case today with the Green Heron. Only one last shot as he was flying to opposite side of canal turned out well, miraculously getting him where he landed though I was trying to get him in flight. In any  case that photo is at top. Below is one of the nearer but out of focus shots.

Green Herons really should be gone by now. But I know one was sighted at John Heinz NWR  in Philadelphia last January. Perhaps a few are sticking around due to milder winters. 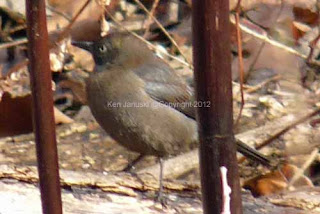 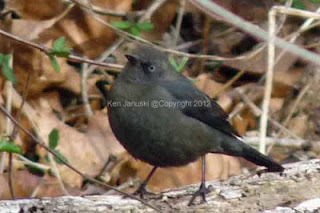 One of today's pleasant surprises along with the Green Heron was a bird I rarely see, a Rusty Blackbird. It's been at least five years since I've seen one, though they're also somewhat common at Heinz NWR in winter I think. Two photos are above. 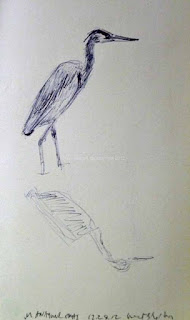 And finally a bird that is not a surprise at all, but still a welcome sight, a Great Blue Heron. This time of year they seem a little more focused on fishing and a little less skittish than the Green Heron I've been seeing. So it's a lot easier to sketch them without them spooking as they do in summer. Of course the 35 degree temperature still limits how much time I spend sketching. I was happy for this opportunity. I just wish I'd been able to do it as well for the Green Heron. Hopefully he will stick around for the Philadelphia Mid-winter Bird Census in early January.
Posted by Ken Januski at 5:54 PM