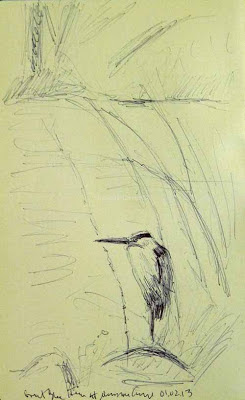 It's been awhile since I've posted anything here but I've finally returned to field sketching if not yet to finishing that Green Heron reduction linocut. Oddly enough it was the search for a Green Heron that I saw at the Manayunk Canal just a few weeks ago that had me out there again today.

No luck on the Green Heron but I did see a couple of Great Blue Herons as in the sketch above. I recently received a number of books as gifts, many from Langford Press in England, and two by the artist Michael Warren, American Birding Sketchbook and Images from Birding. Both do an exceptional job of incorporating bird and environment, often with the birds taking up less that 25% of the composition. I love this type of bird art. Anyone who knows much about art knows that if often just doesn't look good when you plop your subject down in the middle of the canvas. I don't see much of this type of composition in bird art. Warren's books remind me of how it can be done and how exciting that can be. So that's why the sketch above incorporates, more or less, the environment and doesn't concentrate just on the bird. 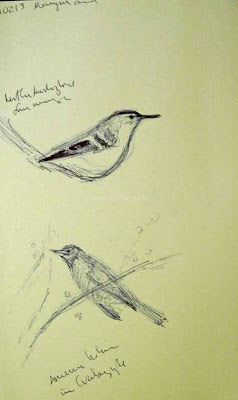 The sketches above are also from today. In the first I tried to draw from memory the Northern Mockingbird that was sitting in a berry-laden shrub about 15 feet away. But as I started to draw him he flew off. So I had to rely on my memory. As you can see I still need to to some more work on mockingbirds. As I was about to leave I saw the only American Robin of the day perched just a few feet away in a crabapple. I think he must have been hungry enough that I wasn't threatening to him. So I did this quick sketch of him in the crabapple. Oddly enough it looks almost identical to a sketch I did a number of years ago from photos of a robin in our own crabapple.
﻿
Posted by Ken Januski at 4:17 PM