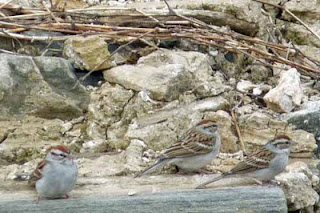 Time for a brief delay in art posts to show this photo of some handsome Chipping Sparrows seen at Andorra Meadows in Philadelphia today. This is done strictly for ebird so that they will stop questioning the fact that I've seen Chipping Sparrows there this winter.

I really don't see Chipping Sparrows that often and have been shocked many times when I see one birding elsewhere and everyone around me looks like there's something wrong because I'm fooled by such a common bird. They are common, but only in some environments and at some times of year. I guess they are, or more likely, have been rare in Pennsylvania in the past in winter. But now they are regular at Houston Meadows and Andorra Natural Area in fall and winter. I think I've seen them every winter month for the last two years.

Oddly though they're not that easy to photograph, at least not without better equipment than mine. They are relatively small and, at least in winter, fairly skittish. Often I see them backlit in trees, too far away to get much of a photo, or even to sketch for that matter. I'd like to sketch them but I think my only chance will be through a scope. But inevitably if I bring a scope I won't see them! Today's birds were surprisingly cooperative. As I looked at the 3 seen here I finally noticed 9 others scattered about within a few feet. But once they flew they were gone and I never saw them again. 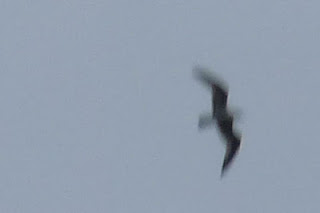 But the Chipping Sparrows weren't the big thrill of the day. Instead it was the Osprey above. It's very early for them but we are having unusually warm weather and there was a very strong wind. Perhaps he was blown north by the storm. Or so I thought for about 30 minutes. As I drove home I saw a Ring-billed Gull in flight and I remembered how long and bent their wings can be. And I remembered I'd seen one much lower in the sky a few minutes before seeing my 'osprey.' Sad to say I don't think there's much doubt that the osprey was really a Ring-billed Gull!! Well maybe not all that sad. I do think I'd prefer for the seasons to stick to their normal course and not be horribly speeded up, most likely due to global warming.
Posted by Ken Januski at 2:54 PM

eBird also flags my chipping sparrow observations in the Philadelphia area in winter. I do think they are kinda uncommon in this area. eBird seems a bit cautious; they also flag my observations of American Tree Sparrow, which are, according to the data, more regular here in the winter.

If you were to falsely report a house finch (say it was really a purple finch), there's probably no damage done. But if you falsely report a chipping sparrow, say it were an American tree sparrow, at this time of year, it would be more problematic. There are few enough of these birds that they're limited to certain habitats, and the data on where individual ones are sighted is potentially very important.

I appreciate eBird's filters because I like to have attention drawn to the fact that--hey--they really want to be sure about a particular species. There are times when I'm out in the field and I casually see a sparrow--for example, say it's in summer, and I just catch a brief glimpse in poor lighting. I might say--"chipping sparrow" and be okay with that. This time of year though, I take a long hard look. There have been some sparrows where I wasn't sure...no size reference, poor lighting, brief view, no call notes heard. Once eBird flags something as rare, I know to be more careful. There have been quite a few times I've deleted observations because when eBird flagged something as rare, I realized that I hadn't really exhaustively ID'ed the bird properly...makes me keep going back to Kenn Kaufman's book that keeps telling me to be more cautious on ID.

I don't think eBird always requires a photo. I've seen them accept records of mine without photos. For example, I recently reported a B.C. chickadee at the same site, for the second time this winter...but I did take extensive notes about how I IDed the bird. I think that's all they really need to know--how can you be sure? Can you demonstrate to them that you are sure?

This is a cute photo of the sparrows though!

Thanks for your thoughts on this. I actually agree with you about the importance to ebird of good data and so I don't mind the filters at all. They serve a good purpose.

I complained to ebird over a year ago when the Red-headed Woodpecker I'd found at the Wissahickon didn't appear on the list. Eventually I found out that all the checking is done by volunteers and that this particular volunteer was a friend of mine. In any case it helped me to understand why it can take a while for questionable birds to be authenticated. That's probably the case here. I think I was just frustrated because it's always the same problem with them.

Part of the point I was trying to make here, and try to make with ebird, is that I think the birds of Houston Meadows and Andorra might very well be the same birds. It's common in fall and winter to see mixed flocks of bluebirds, juncos and sparrows at both. Since only Bell's Mills Road separates them I wouldn't at all be surprised if they're the same birds. And others routinely, or so it seems, have their Houston Meadows chippers authenticated.

And we see them at both places with such regularity that I think maybe they shouldn't be considered 'rare' in that location. But ebird is a great tool and I understand how much work it can be for whoever volunteers to check.

I do have to say that they put up our December sighting of the much rarer Magnolia warbler with no problem and all we had there were our written notes!

By the way I stopped by your site and blog briefly and was surprised to see the Sun Ra Arkestra photo. Oddly enough I'm heading off right now to a gallery where I sometimes show my art work, the Manayunk Roxborough Art Center. Years ago, when it was a much more vibrant venue, Sun Ra played there!

I saw him and the Arkestra centuries ago at Keystone Korner in Philadelphia. What a great venue that was for jazz, and very close to where I lived. Now though I'm pretty much a 90% classical person, though I always enjoy jazz if someone slips it in.