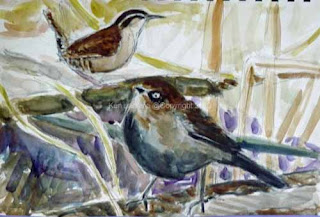 One of the things that interests me as an artist is portraying the sensations that I might experience in seeing something, with that 'something' generally being birds. Recently I saw my first Rusty Blackbirds in many years. I think they're not all that uncommon at nearby Tinicum/Heinz NWR but I just don't get there very often.

When I saw two different birds on two different locations on consecutive days recently I was struck by their subtle coloring. In birding trips over the last week I've often seen a common but striking bird that also sports some beautiful browns, the Carolina Wren.

Both are so striking that they plant a seed in my artistic brain that will eventually germinate into a flower, or perhaps a weed as the case may be.

I have never seen them together. But both are likely to be found in swampy woods and that's  in fact  where I found both Rusty Blackbirds. I kept thinking that I could celebrate them by  putting them both in one painting, tied together by a common environment and those browns.

I'm much more familiar with Carolina Wrens than Rusty Blackbirds so the bulk of time in this painting was getting the drawing of the blackbird to seem right to me. It's based on a photo. The wren is based on a drawing of the wren, drawn six hours after seeing him from  memory.

This is a quick watercolor, though the sketch itself took quite a while. It's 7x10 inches on Stillman & Birn Gamma sketchbook paper. I haven't used this paper in awhile but it's always useful for working through an idea. And it seems far less forbidding to me than regular watercolor paper. So I'm more adventurous I think when I use it.

I'm happy with this. It could be more fully debeloped, especially in the surrounding vegetation.But I did manage to include both birds and I particularly like the Rusty Blackbird. It's not a detailed photographic replica of the birds, but far more importantly it's indicative of the excitement I felt when seeing each of the birds.