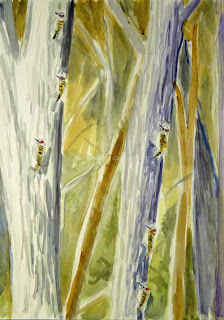 We got a nice 2-3 inch dusting of snow last night so I convinced Jerene that we ought to take advantage of it and hike and bird somewhere, preferably a meadow/grasslands area where we'd actually see some snow. In our immediate vicinity both Houston Meadows and the meadows at nearby Andorra Natural Area spring to mind. Both are less than five miles from our home

We opted for Houston Meadows, mainly because it's got such beautiful views and because it's slightly more likely to hold Eastern Bluebirds, Chipping Sparrows and possible rarities.

Early on we saw a Northern Flicker in flgiht. Jerene thought she saw a second but couldn't confirm it.Two hours later as we backtracked over the same route and were heading for the car we saw another flicker in same area. Jerene said she thought she might have seen a second. When I checked I saw a second a bit to the right in another tree. Then I saw a third, and a fourth. As we continued to look we then spotted a fifth and a xisth!

All were on trunks of two or three trees. They weren't on the ground, weren't on horizontal branches. No, every single one was on the trunk, their back to the sun. At first I thought maybe they were feeding, looking for insects in the bark. But Jerene said that they were just sitting there. She was right. I took a number of photos and each showed a bird sitting still. I can't think of anything other than that they were warming themselves up in the sun. I've never seen this before. And I've never seen so many flicker in such close proximity before.

In the fall we will often see more than six in one day  of birding, perhaps two to three times that. But I've never seen them altogether like this. So it seemed like a good  idea to commemorate it in a watercolor. This is done on Stillman and Birn Delta paper. I've said it before but I'll say it again: this paper is ideal,  at least for me, in working out ideas. It's not so cheap that it immediately  buckles as soon as you put water on it. On the other hand it's not a ful fledged watercolor paper either. The good side of this is that it's not inhibiting. I worry paintings to death thinking I might ruin a good sheet of paper. With this paper I don't have that problem. It's an unusual niche but one that I find very useful.

When we headed out for a walk in the snow I didn't expect to see sunbathing birds. But that's the beauty of getting out. You never know what surprises you'll find. I don't think it got much above 25 while we were out. There were few others on the trail outside of 5-6 mountain bikers. I suppose the cold might have scared some people off. But if you dress warmly winter is a great time to be out.
Posted by Ken Januski at 6:23 PM

So cool that you saw six flickers, in winter! One flicker is wonderful, but to see so many at one time. All the woodpeckers are lovely, but something about flickers makes them stand out from the others.

Yes it was quite a surprise Ellen. I don't recall that we used to see many if any in winter. But we often see one or two when out these days. Still six all together was a real surprise! A friend of mine said they reminded him of dragonflies perched on stems. My guess is that it was for exactly the same purpose: to warm up on a very cold day!

It's always nice to see something like this, and even better to find a way to paint it. It will rattle around in my head for quite a while I'm sure but might eventually become a print or more finished painting.