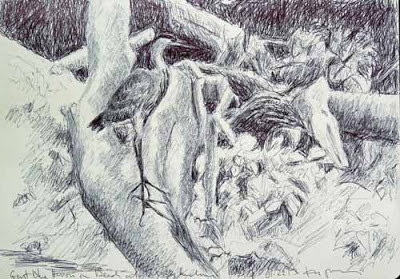 Recently I complained about the lack of cold and snow in recent winters. Be careful what you wish for as the saying goes. We woke up to 12 degree weather this morning.That's nothing like the below zero weather I grew up with in the midwest, but it is cold!

So this ballpoint pen sketch of a Great Blue Heron standing on a fallen beech along Wissahickon Creek would most likely bring back balmy recollections to the heron if he were to view this. I say this because Great Blues tend to stay here all year, no matter how cold. Though I haven't seen any during the recent cold spell I have a distinct mental image of them from other sightings. Their long scapular feathers seem to hang down their back and transmogrify into the nearby icicles. They fit perfectly into a frozen world, at least as it appears to us. I'm sure the herons have other thoughts. 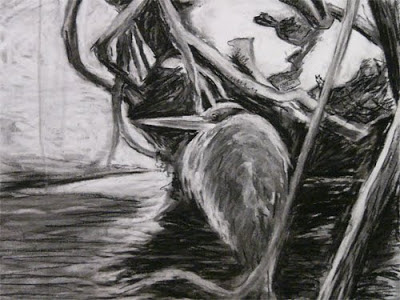 Above is one of my earliest works using birds as subjects. It was done in 2007 and is based on a photo I took of a Great Blue Heron in snowy surroundings at Morris Arboretum in weather that was in the low teens. It's a very early drawing and I've learned a lot since then about drawing birds. I haven't been very successful in rendering the snow but in my mind's eye it's a good evocation of the very cold world of a Great Blue Heron in winter
Posted by Ken Januski at 9:31 AM

I really enjoy using ballpoint pen as a medium. It's amazing what you can do with a seemingly limited tool.

Sorry to take so long to respond. Ballpoint pen has been a revelation to me. I used to enjoy working in ink but had never thought of trying a ballpoint pen until I saw exmaples of work from Alan Dalton and Paschalis Dougalis. They both opened my eyes to how rich it can be. Who wwoulda thought!!