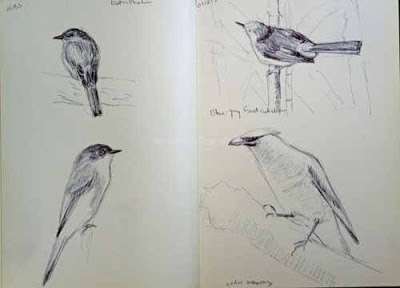 It seems inevitable that this time of year I always end up doing a number of sketches from my photos. I guess this is probably due partially to the fact that it's too cold to be outside as often as I am at other times of the year.

I've also been reading a number of books about wildlife artists almost all of which mention how they based their art on field sketching. But field sketching, which I've done a bit of recently, always seems to show me how much more I have to learn about the form of birds.

That in turn makes me think that I might learn more about their form from drawing from my photos. So that's the origin of the work above. At top are a number of sketches of Eastern Wood Pewees. Beneath are some Eastern Phoebes on the left and a Blue-gray Gnatcatcher and Cedar Waxwing on the right.

All of the photos struck me in some way, for instance how differently shaped the heads of the two flycatchers, Eastern Wood Pewee and Eastern Phoebe are. That's just one of the things I notice in comparing them. I'm almost never able to get a decent field sketch of the Blue-gray Gnatcatcher, nor really a decent photo. So this good one I took last year was a good source for understanding how their tail works. In real life it's often the only thing that I see. For the Cedar Waxwing this was an opportunity to try to get their somewhat mysterious bill, as well as the markings going from it to and around the eyes.

My thought was that by trying to put these things down on paper I'd remember them better and perhaps be able to call on that knowledge next time I get an opportunity to sketch them in the field. There's also an attempt to internalize their structure so that I can abstract from them. My last Green Heron print shows I think how I like to abstract from nature. But that's much easier to do when I think that I have a solid understanding of the bird I'm abstracting. I'm starting to feel better about that.

Unfortunately that's not the case with trees and shrubs. I'm afraid somewhere along the line I'm going to have to do more sketches like these of the vegetation I see!
Posted by Ken Januski at 5:19 PM